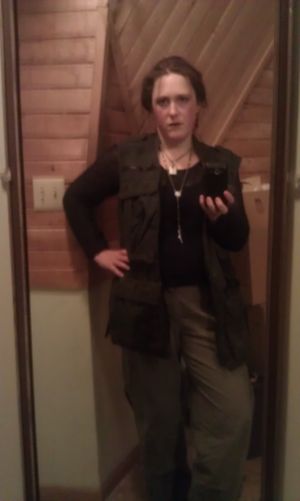 Physical description: Charlie is curvy, but petite and graceful. She has short, straight,-black hair and an almost perpetual scowl. She stares at people a lot and invades personal space. Her low humanity bothers some people. She enjoys that.

Charlie was born in Montreal and acknowledged in Quebec City. She hates the Sabbat with a fierce passion that may have something to do with this. She came to the domain of the Twin Cities in 2007 but did not stay. She returned in 2011 during the year of fire, served briefly as primogen and then served as scourge under five princes. She has been mentored by both former Archon Takashi of the Children of Haquim and Patrick Lee of her own family. Despite often behaving in socially inappropriate ways, Charlie has some accomplishments to her credit. She helped bring the Giovanni back to the domain to address a wraith problem, planned and hosted a successful salon with Harpy and clanmate Natasha Taylor, and has stood as the sole voice speaking for clanmates in court and mentored several clan mates. Charlie suddenly left both her position and the domain in 2013. She returned to the domain in the summer of 2015 and shortly thereafter was re-appointed scourge of the domain. Since then she has continued to look after the interests of Clan Toreador in the Twin Cities. She successfully presented at court on her role as Scourge and on the Tradition of Hospitality, and lead and participated in raids to address breaches of the Masquerade. She assisted Fargo with scouting for the re-taking of Grand Forks from the Sabbat. She provided the force fighting against the vozhd with ammunition and guns and fought it unflinchingly twice, along with the other warriors of the Domain.

With the growth of clan Toreador in the Twin Cities in recent nights, Charlie served as Primogen for nine months before being chosen as Harpy. She has been active in supporting Toreador in Fargo, Winona, Springfield and Kenosha. When she is not intimidating people or killing things, she volunteers with charities and patronizes the arts. She served for over a year as Harpy in the Twin Cities before taking praxis in Fargo, ND in November of 2017.

As Prince, Charlie emphasized a return to tradition in the Domain of Fargo/Moorhead; re-introducing a practice of formal court and insisting on demonstrated competence in her Domain officers. She was a firebrand for the Camarilla nationally, and championed the rights of Princes and the accountability of all sub-organizations to the Camarilla. Charlie proposed the return of the ability to strip Acknowledgement at the 2019 Fargo/Moorhead Conclave, which her Domain hosted. Charlie held the Accounting for Ramsey Garand until his Acknowledgement, even though he was not her childe.

In August of 2020, Charlie disappeared and praxis was taken by Henry Garand of clan Brujah. Over a year later, it was discovered that Charlie had been kidnapped and taken to the abyss. A rescue mission was organized and she was successfully recovered. Just not whole.

Herself
Her sire (deceased)
The Sabbat
Infernals

An ugly story. Let us focus on making the world more beautiful, ouais?

Violently opposed to the idea 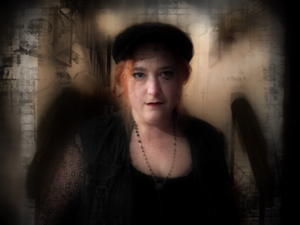 “There is anarch etiquette?” - Charlie

“These are for you. They are dead and broken, just like your sire.” – Charlie, handing a basket of drowned kittens to Natasha Taylor

"Distrust is common sense, petite. You deal with vampires." - Charlie

(about Charlie)“You know you’re in trouble when the new Toreador is creepier than the Sabbat.” - Ainbeartach (Sabbat member working with the city during the year of fire)

"She takes some getting used to" - Fargo citizen about Charlie

"That Stupid twat can go FUCK herself!" - Pagan

Sabbat's last words: "Stupid, French cunt." Charlie as she kills him: "I am not FRENCH!"

"Charlie is in her left mind then? Good thing to know." - Archon Maya Petrova

As a condition for taking the position of primogen under former prince Alexei, she asked for rights of destruction over her family and got it.

Charlie is a happy drunk.

During Alexei Semago’s praxis against former prince Sylphain, Charlie was the only one who actually shot Alexei.

Former Archon Takashi once attacked her in the middle of court just to make a point.

Charlie shot Roerik Tanar in the back to get his attention.

Charlie is trying to go on a path.

Charlie was possessed by a Daeva and is permanently scarred by it.

Charlie is described as a storm by the Sabbat for her combat prowess.

Charlie is terrified of bugs.

Charlie has a power fetish for vagina guns.

Charlie has a stick up her ass that can rival any Ventrue's.

Charlie is a secret Ventrue.

Charlie has a crush on a Ventrue and she hates herself for it.

Charlie listens to '80s pop in the rain.

Charlie is secretly a Lasombra.

Charlie threatened an Archon in defense of Ruth Stivaldi.

Charlie has a power fetish for Corkie Pellegrino's shoes.

Charlie makes a habit of threatening Archons "just because."

Charlie's former Seneschal, Robert Sissco, is in love with her.