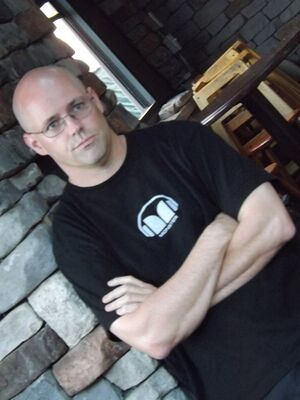 Are you gonna fuck with this?

Physical description:
Tac is a big, burly man, typical of a professional wrestler. He stands about 6'3" and weighs in around 280 pounds of solid muscle. He shaves completely bald and has blue eyes.

Tac was a semi-pro wrestler in his mortal life, never able to make it into the WCW or WWE. To make ends meet, he worked as a bouncer at local bars in Monterey, CA, and eventually got picked up to work security for various Monterey County politicians. His sire noticed him at one of his matches in Salinas and embraced him that very night.

After that, he moved around California, performing for various semi-pro wrestling leagues, and bouncing for people who’d pay him - one just doesn't give up what works. On one of his gigs, he worked security for the upstanding Toreador Carmilla from Atlanta, who became indebted to him for repeatedly pulling her fat out of the fire. Upon word of her disappearance reaching him in California, he immediately moved to Atlanta to investigate. She still has appeared, but Tac seems to have calmed down a bit over her MIA status.

But that doesn't mean he's not a firebrand. Rallying the Brujah in the Domain of Atlanta, Tac seems to have a new crusade every night, and is frequently seen to be very, very, displeased. Getting involved in a mess of misunderstanding at the standing of Nathan of Griffin certainly didn't help his disposition any.

He's always keeping himself busy. Tasked with the effort of keeping local Anarchs in line, he's always pushing back the sea in that effort, and has developed a hot and cold relationship with them as a result. He's also been seen travelling to other domains to help snuff out growing pockets of the Rebellion, and as such, has recently been admitted to the Ivory Legion.

He goes by his stage name, Taco Grande, but usually Tac for short.

Wearing his heart on his sleeve, Tac's developed a reputation as a no-nonsense straight shooter, though he's known to bring out absurdist sarcasm when he thinks someone's being a dumbass. This has led to some interesting interactions with members of the Tower across the country who decided to take some of his words a little bit too literally.

How the fuck would he know?