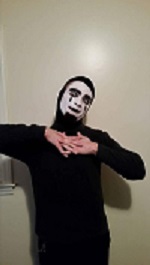 Arkham, in his silent glory.

Physical description: Arkham stands at roughly 6 feet tall. He is lithe, and svelte, moving with the grace of a dancer or an acrobat. There are few or none, however, that have ever seen his real face. Whether hidden behind makeup or mask, it seems that none can be found that can describe his actual features, only his distinctive style and nature. (OOC: Seductive, Gorgeous x2)

It is hard to say exactly what type of man Arkham is. What is commonly known is that he is a very quiet person, and there is no one who can admit to hearing him say an unkind word about anyone. Yet he does seem expressive, in his way, and is often helpful when he can be. There are those that would call him a man of many talents, or even a man of myriad or mixed talents. Yet few there are who would know the depth of his abilities.

Little is actually known of the enigmatic figure known as Arkham. Much may be theorized, still more may be inferred, but little can be confirmed and known. If one looks through history, some things may be pieced together, but most will only remain an educated guess.

Most recently, he randomly appeared in Atlanta, making entreaties to gain Hospitality and residence there. Before that, he can only be glimpsed and surmised. For example, his most recent previous sightings were in the early 1930's. He was spotted in the near vicinity of several artists and writers whose fame only seemed to rise posthumously, particularly a horror writer known as Howard or Phillip to the residents of Providence, Rhode Island. Shortly after his seeming friend passed away, his movements became untraceable again, before reappearing a decade later in war-torn Europe.

The further back one looks, the less definitive his presence becomes, mostly only recognizable by descriptions or shadowy images in a background of chaotic, violent, and/or tumultuous events. Paintings with a shadowy figure, smiling with makeup on its face. Descriptions of a crowd with an enigmatic masked figure watching. Treaties being signed, wars begun, governments overturned, and empires toppled. With greater and gaps between, the clown, the mime, the harlequin can be seen at several of society's turning points, never as a direct hand but only as an observer, sometimes gleeful, but more often seeming pensive, studious. 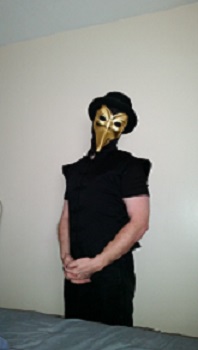 Unknown, or at least unadmitted

Sir Apropos of Nothing 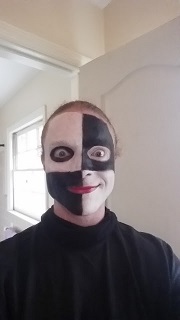 Gary Lewis & The Playboys, Everybody Loves a Clown

-No, really, he is a Brujah

-He served one of the nobles that helped overthrow the crown 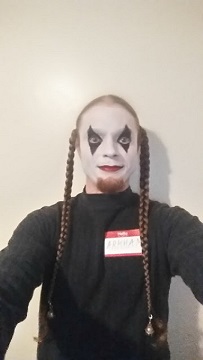 -He has seen death, numbers of deaths. More than most warriors, most soldiers.

-His vocal cords were removed as a mortal. Tongue still works just fine, though.