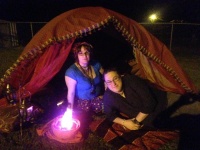 Entered into kindred society as his mother's ghoul, was eventually embraced after a misadventure through the Shadowlands left him with a wasting disease. Spends most of his free time travelling around the globe, but has taken a liking to Georgia.

Usually seen in the company of other Romani