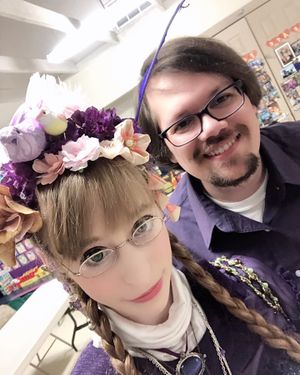 Near the tail end of 2017, Jim wanted to head back home. Discovering that Massachusetts was controlled by the Sabbat, he headed north into Maine, eventually settling in Lewiston/Auburn. Since then, he has acted as a lesser harpy, Keeper of Elysium (though was removed from the position after the praxis seizure of Lewiston/Auburn by Prince Connor), and Primogen for Clan Malkavian in Lewiston/Auburn. In March of 2019, he was named Seneschal by Prince Vaclav. Jim was heavily involved with the return of the Plague Bride during the Glitter and Gloom of the same year.

After a second praxis seizure in Lewiston/Auburn during November of 2019, he was named Harpy by the Primogen Council.

In March of 2020, Jim attended Glitter and Gloom in Baltimore once again, this time participating in the "Malkavian Disco", a pocket dimension that existed somewhere within the Network (presumably). After the Eater revealed himself within the Disco and was nailed to a cross, Jim chided the assembled Kindred away from the Methuselah and tried to get the Malkavians to decide the fate of their clan by themselves. He then stood guard by the Eater with one of the dolor swords (which previously was within the Plague Bride) to prevent more 'rubbernecking', until he succumbed to his derangements and fled the Disco. He was present for the crowning of the new Coronati.

During a gathering in Lewiston-Auburn in August 2021, the current prince, Rufus Buck fired the entire court and began to verbally attack members of his domain and physically assaulted Jim's childe, Cecilia Winters. Enraged, Jim declared that Rufus had not acted in a way becoming of someone of his standing. Rufus then admitted that he no longer wanted the job, and announced to the rest of the domain (before leaving the building) that they needed to come together to choose a new prince, or else the domain would be folded into Portland's. After some back-and-forth from all members of the domain, Jim stood up and declared praxis of Lewiston-Auburn. Michael Gunn, a former anarch-turned-member-of-the-Tower, shot Jim with an enchanted arrow and immediately staked him. Before being beaten into torpor, Michael began spouting prophecy and tearing his eyes out with a pocket knife. Jim was vanished by Go and evacuated from the gathering site. It is presently unknown where Jim is, or if he made it out alive. However, once Rufus returned, he re-established his praxis and decided to fold it into the Domain of Portland on the spot.

Cecilia Winters, of the Domain of Maine