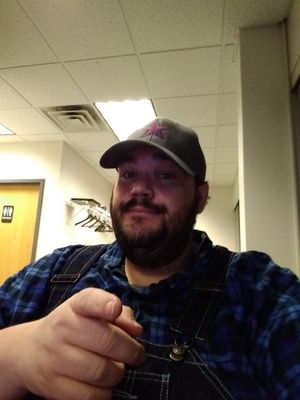 Real Name: Delmar Rufus Buck IV
Nickname: Rufus Buck
Apparent Age: Late 30s.
Concept: Philosopher Farm Hand.
Physical description: At over 6", he is an obese man appearing in his late 30's. With weathered features and calloused hands it is obvious he is a working man. Rufus tends to wear flannel and denim with an ever present gray baseball cap with a strange insignia of a red and blue star dead center. Often he is found with a red bandana on one wrist and Jim Beam Devil's Cut sweat band on the other. At his belt line is a twisted stretch of heavy duty rope and a large gray black military wrap. Depending on the day he is in jeans or overalls.

Rufus is known to have played football pretty well offered a full ride to the University of Texas, however when he was hit by a truck it ruined his career with his leg being mangled. After healing he went on to work on the family farm more actively and several other ones in the area to help pay for his technical college degree for animal sciences. His ability to calm and control the larger beasts and compassion for animals in his care drew the attention of his former master. He worked ten years for the mysterious, yet rumored powerful, Elder. On a routine trip to get some rescue animals in Maine to bring back to the farm in Texas he was jumped and left for dead in the woods of the domain of Lewiston Maine...

Real Name: Tucker Buck
Nickname: Tuck
Apparent Age: Late 5
Concept: Perfect Bloodhound
Physical description: A larger than normal bloodhound that seems pure bred and loyal to Rufus Buck. It is quiet and tends to wander around with a leash hooked to it's collar and clipped tight so it follows the letter of the Leash Law. His eyes betray an intelligence most animals don't have.

History: Rufus says he has raised three generations of Tucker's line and each one gets larger and larger. Tucker was the runt when born and the only one to survive. The Brujah is as loyal to the dog as it is to him.