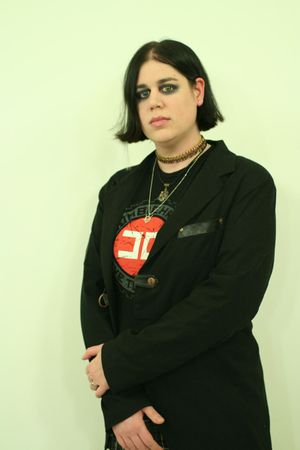 Physical description: 6'1", dark almost black hair, her left eye under closer inspection is fake and she wears various colors of it, her right eye is naturally brown, but she often wears a colored contact in it. She dresses in baggy jeans or bondage pants, t-shirts, hoodies and skate shoes. Her left arm has a series of strange looking scars somewhat like small clawmarks.

Born in the ‘Dirty’ South and raised there for most of her childhood, Alice experienced a string of tragedies when both her parents and then her grandmother were murdered. Eventually Alice moved to Boston to be raised by her uncle, a police officer; there, she also joined the punk gang ‘Friends Stand United,’ better known as FSU. She was then accepted to Georgia State University, where yet another personal tragedy put her into the hands of her soon-to-be Sire, Saleem ibn Rashid, then Prince of St Louis.

Embraced in 2008 and Acknowledged the same year by her Sire, Alice was rarely seen in Kindred society as she underwent rigorous studies. Early in 2009, Alice moved out to the West Coast, where she has resided in many Northern California domains. Alice has been involved in a number of occult investigations and occurrences, the most notable being the issue with the Eye of Hazimel.

Currently she resides in both Sacramento, California and Tampa, Florida.

Was executed in the winter of 2011 by Archon Peter Premysl for being a threat to the Camarilla.

Saleem ibn Rashid by Embrace and Niko Athanasius by adoption.

"Don't worry I'm a fast learner, alcohol laced blood plus being an oracle and being at a Rant does not mix. Other drugs maybe, but I'll wait until much less serious matters until I experiment with that."