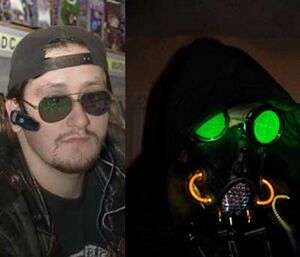 Alias(es): The Gesserit, The Watcher, Omega

Physical description: 5'10", physically unassuming. Wears goggles or shades a lot - if you look closely you may see they have heads-up computer displays. Usually has at least 4 electronic devices on him at all times. Comic book or geek t-shirts are usual.


On certain occasions (battle or superheroics) will wear a full hood and mask. He calls this identity "The Watcher".

AURA NOTE: Alex's aura will look like a mosaic of different flashing lights rather than a unified glow.

Alex is VERY outgoing, joking and of good humor - often annoyingly so to others at Gather. He initially assumes everybody is friendly - after all, if they are in the Camarilla, they must be friends, right? He will greet newcomers and visitors with a handshake and introduction. His social graces aren't always the best, and sometimes blurts out secret information, often without knowing how he knows.


Alex will inappropriately ask people their clan and how long since their Embrace - if asked why, will show a spreadsheet of blood types he has tasted, filtered by clan, age and gender. (He has one for Kine that is almost full.)

Alex speaks in the first person plural - he refers to himself as "We". He will deny (and find insulting) people thinking he has Multiple Personality Disorder. Rather, he has a collective of parallel processing units, like the Borg or a beehive, in which the Alex persona is dominant, but there are currently over 400 other units as well (see Aura Note above). In written communication, will lapse into "L337" under stress; after admonishment, Alex created a voice-transcription program so he can write proper documents verbally - this frees up his hands for other tasks such as typing code or soldering electronics.

Often seems distracted, especially by bright colors and intricate patterns. Often seems to be listening to people not in the room.

Alex Randall was born in New Jersey in the late 60's to a lower-Middle class family. An early adopter of geek culture, he was on the forefront of computer hacking and also involved deeply with Comics and SF/Fantasy fandom.


Alex tended to go over storylines from games or comics in his head, and would verbalize, while walking home from the shop. Unfortunately he was overheard by a Malkavian on the prowl known only as "Enigma", who thought his mutterings about aliens and sorcery was the initial signs of schizophrenia. She turned him and got him Acknowledged on the east coast. She eventually wandered into Sabbat-held NYC. She has not been seen or heard from since.


In response to a vision, Alex moved out to the Twin Cities, MN in the 2008. There he opened up a comic book shop called "The Comics Collective". Alex is assisted with the day-to-day running of the shop and other errands by his ghoul, "Bob". Bob is heavy-set, with a beard and mullet, and wears a baseball cap and long trenchcoat. He doesn't speak much.

Alex has since also been a major force in opening "Happy Families," a 500 bed homeless shelter in Richfield MN specializing in families. He has also created many devices and helped monitor and secure electronic communications for the domain.


Alex placed in charge of the Accounting of the Caitiff/Setite Nilufer by Prince Jordan Restax. He guided her through her Accounting and early life in the Camarilla, until her moving to Egypt for clan training.

Alex has held many offices in his short time in the Twin Cities. He has been Primogen and Whip for his clan. He was Senescal under Prince Var, and planned the successful raid against the Lupines that had been infesting the city. Upon Prince Chester Black asuuming praxis, Alex was elected Harpy. Alex decreed as Harpy that a period of 7 year's mourning for Prince Var would be instated, and any citizens who had dealings with his murderers (Clan Giovanni) would be investigated. This could be shortened by the punishment of Enzo Giovanni. (This has since been rescinded somewhat by Prince Morgan Wynn Howell.)


Much to his (apparent) dismay, Alex was eventually forced to choose between his friendship with Chester Black and his duty as Harpy. Alex ended up stripping the prince of several measures of standing due to various scandals. Alex was temporarily banished/went into hiding.


Upon his return to the Twin Cities after the fall of Prince Black, he has assisted the Keepers in electronically securing Elysia, but otherwise has avoided political office. He has become more and more involved in his own projects, to the point where in the summer of 2010 he has taken a leave of absence from public life in the domain to concentrate fully on unnamed projects.


November 2011, Alex returned to public life. Within several hours of his reappearance at Court, he was asked to once again be Harpy. Alex has (reluctantly) taken up the mantle once again. The strains of the office seem to be taking hold, as he has less apparent patience for incompetence, and to the surprise of many asked for Rights of Destruction on the former Keeper James Carlson, along with Archon Takashi. Alex seems colder recently.

Also, for some reason he has adopted the "Jersey Shore" orange guido spray tan...

Alex met his Final Death on December 30, 2011, battling Infernalists in St. Cloud, MN. He has asked his Lesser Harpy Razi Massoud to look after Bob.

None / All of the Camarilla

Allies (at least in his mind)

Randal from Clerks
Brodie, Steve-Dave and the Fanboy from Mallrats
Alec Hardison from Leverage
Thinkgeek.com
Church of the SubGenius
Deadpool

Tropes:
Proud To Be A Geek
Don't Touch it you Idiot!
Ascended Fanboy
Curious as a Monkey

Devo
Satisfaction
Beautiful World
What We Do

"Oh, that's simple! Just interface teh alpha connectors to (indecipherable technogibberish)"
"Man, I'm missing a raid tonight 4 this? My guild is gonna bitch."
"Hacked & cracked, bitches!"
"Haz u ever seen teh US from Low Earth Orbit? It's wild!"
"Would u like 2 make a donation 2 teh collective? It's just a sip."
"Heh, n00b."

Is a diablerist.
Is building a robot army.
Used to be the Scourge.
Has drank werewolf blood.
Secretly is a cold-blooded, calculating bastard.
Can tell what clan a Kindred is by tasting their blood.
Is becoming a cyborg.
Has visions of the future, and is psychic.
Has most of the city under surveillance.
Is using the Homeless shelter as a private feeding ground.
Only came back to the Twin Cities to become Harpy.
Alex was killed the Camarilla turncoat Kevin Mason.