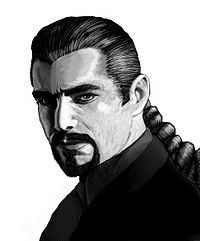 Nick is a Sect Defector. A long time Sabbat spy and infiltrator, he has turned his back on his former sect with a vengeance, and now hunts Sabbat without mercy. He is known to have ties with certain Italian-American groups of questionable legality. He served for a half year as Scourge in Kenosha, Wisconsin, and later became the Sheriff of that Domain for some time, fighting Sabbat, Lupines, Demons, Infernalists, Hunters and even Mages. He abdicated his position in the wake of the Praxis of the Kyasid, Sebastian Marconius.

Omerta by Lamb of God,

Blacken the Cursed Sun by Lamb of God,

Sympathy for the Devil by the Rolling Stones,

I Did It My Way, by Frank Sinatra,

"You need to stop talking about learning Obtenebration and get the fuck out of my sight before something terrible happens to you."

"So... sorry about that whole 'Abyssal Arms attacking you in the unnatural darkness' thing. I know. Awkward."

"You're building a house on a foundation of shit, and frankly, I can't wait to see how long it takes for your 'supporters' to come for you"

Nick proved himself to the Camarilla by executing his own Sire.
Nick proved himself to the Camarilla by killing several dozen of his clanmates.
Nick owns a Zippo that he uses exclusively for executing Sabbat Lasombra.
Nick can tell if a Kindred knows Obtenebration.
Nick has slain at least six Elder Sabbat, members of his clan.
Nick has slain over 3 dozen Sabbat Lasombra, executing them by fire.
Nick is hunted by the Sabbat for his defection.
Nick has converted other Sabbat to the Camarilla since his own defection.
Nick is vigorously against the spread of Obtenebration to non-Lasombra.
Nick has done daylight raids against Sabbat group havens on numerous occasions.
Nick has an apartment in Prague, and regularly hangs out with Justicar Pascek and his Archons when he is in town.
Nick actually spends so much time in Prague at this point that he ended his lease and bought a condo.
Nick controls garbage collections in Prague. He was inspired to take over the industry by an unnnamed Archon.
Nick is rumored to have met Final Death, killed at the hands of a massive Sabbat Wyld Hunt.