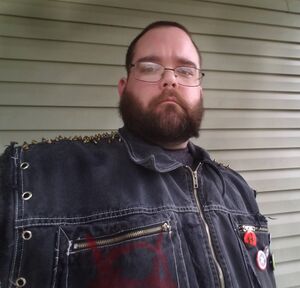 Zeke's first attempt at a selfie

Physical description: A 5'6", chubby, bearded guy with glasses often seen wearing an old black denim vest with short metal spikes on the shoulders and various pins on his chest.

He never really talks about his past, only that he's spent some time on the west coast before traveling across the country looking for some place to settle for a bit. He found himself in St. Augustine and realized it was devoid of Brujah and he's now determined to find out why and to help establish them as a dominant clan in the area once again.

Since coming to Florida Zeke has been travelling the state doing whatever he can to aid the various Domains in the area. He's spent most of his time spent away from St. Augustine in Tampa making allies and in Port Charlotte aiding in their Demon issues.

There is a handful of people he trusts enough to call a Coterie, but nothing organized enough to give a name.

Your guess is as good as his.

None that he knows of.