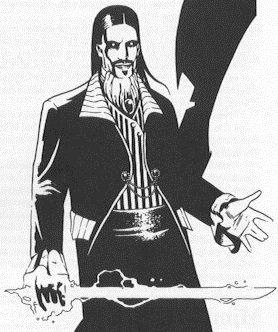 Physical description: A tall, clearly 'native' American, but with heavily scarred forehead and cheeks. The scarring both enhances and detracts from his overall visage; giving him an edge that unnerves some who see him. Overall, his skin is still ruddier than most vampires of Occidental heritage. Despite all appearances, he speaks English with a pronounced Catalan accent.

Basic Timeline: Alonso is not a recent embrace, but is a recent release from his accounting. He is of 'native American' descent, but demures when asked about his mortal history. He also knows a great deal of history of the Southeastern United States, from pre-Colombian contact in general, and of St. Augustine in particular.

It would appear that Alonso has a soft spot for the Toreador of St. Augustine, working closely with their Primogen, and young artistes and poseurs that have entered the Domain. He has begun investigations into the neighboring territories of the Domain, namely the Sabbat of Palm Coast and of Northwestern Jacksonville.

After setting up and distracting the Sabbat of Jacksonville, to allow the Ventrue to save their elder, Alonso's humanity slipped, and he departed the domain for personal reasons.

Obvious Merit & Flaw Details: The scarring on Alonso's cheeks and forehead give him an unnerving mien. Occasionally, it appears that Alonso's shadow does not move in sync with his movements, something that a few in court have noted. Further, many Toreador (and only Toreador) note that they can occasionally see an ephemeral wraith hovering just off of one or the other of Alonso's shoulders when their senses are heightened.

Nothing that a name would be put to.

He's still working to ingratiate himself with the local Primogen, of which he's had mixed success.

The Virgin of Catalan

Various tales of native 'conversions' to Catholicism which led to the saying, 'no greater fanatic than a covert'.

To make an Alonso, mix together: A little bit of Oberyn Martell and Richard Swift, and if some fellow players are to be believed, Squanto. Presently, he's heading into territory of Varys, Carmine Falcone, Gus Fring and Wilson Fisk.