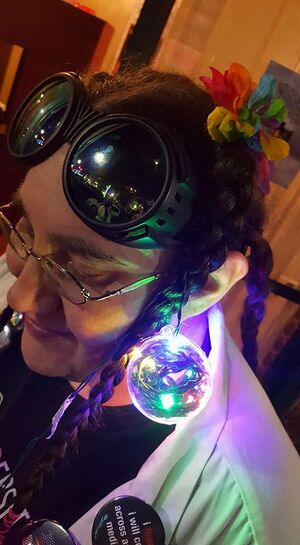 
Physical description:
Sonya is a moderately pretty female. She has long hair that she appears to mostly ignore and her eyes seem always downcast. She postures herself awkwardly and is in near constant motion, rocking and waving her arms. She has learned that waving her hands makes people nervous and they accuse her of doing magic, which annoys her so she tries to keep something in her hands to prevent that stereotypal activity. She wears a lab coat and usually has goggles on her forehead. She used to wear an embroidered lab-coat, but she claims that it was lost in a volcano. She often carries a brown bookbag, a viola-case (both of which contain countless apparently useless objects) and/or a silver boombox. Otherwise, she dresses casually in T-shirts which usually have some kind of science slogan on them, trousers of some sort, and sneakers. Currently, she is almost always surrounded by music although genre and popularity of said music are not predictable.

Sonya (who went by Myrna for most of her life) was recruited by Clan Tremere while she was still at Bryn Mawr University, despite the fact that she was dependent upon a communication book of words and phrases to speak. She was a very gifted scientist and showed a great deal of promise, especially in written format. Once embraced, she buried herself in research and was not seen in public again until 2012 when she was sent to Griffin, Georgia.

The year had, by all appearances, been a very busy year for Sonya. She was active in the city and - probably due to this new public identity - no longer needs to use the communication book to talk. She also volunteers to protect less martial citizens during battles and appears to be somewhat effective with this.


Beginning 2014, Sonya has appeared to go more and more insane. She complains of auditory and visual hallucinations, visions, and nightmares, and occasionally asks people if they are sure that they are real. She has been seen exhibiting odd behavior around the city and those who have seen her writing know that she experiences severe dysgraphia. She showed up at gather one night in pajamas and insisted that someone was trying to burn down her house. She is occasionally distracted and frustrated by unseen agitators and appears to find relief mostly by hyper focusing on mathematical or scientific computer work. Her viewpoint, when prompted, is that she is upset because she is a scientist and scientists depend on sensory input for data, but she can no longer trust that. This appears to be the major source of frustration on her behalf.


Towards the end of 2014, Sonya and Gaia were involved in a bit of an odd performance that caught the attention of the new Prince. Nothing untoward happened, aside from the power inexplicably cutting out. Prince Pompeii declared it illegal for kindred to provide public entertainment. Since then, Sonya's attendance at gather has been a bit more sporadic - in that she tends to be in the area in case she is needed (and a gather hasn't gone by that she wasn't), but doesn't attend overmuch. Towards the end of 2015, she began carrying a silver boombox around with her and playing music where-ever she was as well as singing along with whatever is playing. She is a very good singer and has made some new friends because of this habit. She makes a point of publicly asking a member of the administration if she may please sing along to her CDs. People who know her well think that there must be a point to this. People who know her REALLY well suspect that the point may be routine.


Despite her difficulties getting along with the former administration - or perhaps because of it - 2016 and early 2017 saw Sonya coming a lot more into her own. She developed an assertive streak, stubbornly collecting intelligence and presenting it to those she considered most in need of it for the betterment of the city. She had a hand in many of the more prolific events of the domain, mostly in an investigative format, and has made friends with the people in power in spite of herself (and possibly themselves). When the Praxis changed to Jan Von Reinlander, Sonya saw that her voice was being listened to (a change). When it changed to Prince Stevens, Sonya found herself thrust into the position of Primogen - by invitation.

Her service as Primogen was arguably without incident and she did a good job. She investigated as expected and quite often had hard-to-acquire information for the other Primogen. As a result, when Pompeii returned and took Praxis again, he agreed to allow her to remain Primogen (even though she was fairly vocally against him).

The night that Pompeii gave up his Praxis, the Harpy changed over as well and the Primogen Council promoted Sonya Nowagowski to Harpy.

Is currently Regent of Griffin, Georgia.

HOWEVER, she has been known to work with:

Claims none. While she'll admit to being annoyed by most people, she does not really care enough to state that anyone is her enemy.

Saul, childe of Simon the Miller. Odds on bet is that he's a Tremere.

"I am a scientist. I need my senses to provide accurate input."

"I don't know that I'm okay with you dating my sire."
S: "I'm not sure that I am, either, but he seems pretty okay with it."

"Do you see a way in?"
S: "The door's locked. Can you walk through walls?"
incredulously "No."
S: "That's weird. I can."
...
"Can you make it so that I can walk through the walls?"
S: "No. I guess corporeality a thing that you either do or don't do."
"Oh."
S: "I suppose that I could teach the wall to be incorporeal and then it shouldn't put up much resistance to you."

"All things are made up of particles and waves. What I do is find ways to study these waves, and then find ways to affect these waves. I find the sorts of things that a person can do that tells the waves to budge up a bit if I need them to. It's nothing that any properly trained scientist couldn't do."

"There's a difference between a hypothesis and a conclusion. Why does everyone find this so hard to grasp? When I say I have a hypothesis, it means that I need to test not that I already have evidence!"

S (to Prince Pompeii): "May I play music in public tonight?"

S (to Prince Pompeii for about the eighth gather in a row): "Oh! May I sing along with my CD player in public tonight please?"
Pompeii: "Yes. Yes! Look, Sonya, you can do whatever music you want provided that the music isn't magical, okay?"
S: "Okay. None of my music is magical."
Pompeii: *gives Sonya a funny look*
S: "Tesla coils are science."
Pompeii: "Look, just don't break the Masquerade, okay?!"

"... Oh, no. I've just realized that I have more social skills than anyone else in this room. I'm sorry. I've fallen in with a bad crowd; I've got to leave." *leaves*

Sonya is crazy.
Sonya has a phobia of giraffes taxi cabs.
Sonya is drugging the Primogen of Clan Gangrel.
Sonya is a seer.
Sonya has discovered the secret power of the Pied Piper.
When the Primogen Council voted for Harpy, Sonya voted against herself and for her competitor.
Sonya is really a Malkavian