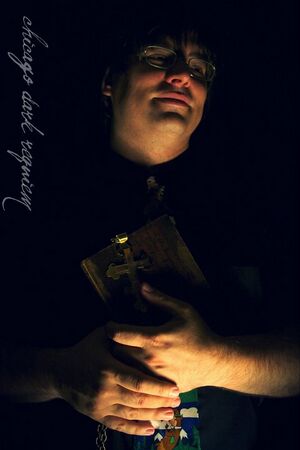 Milos in contemplation of God's plan (copyright by Meredith Gerber)

Physical description: Milos has brown disheveled hair. He almost always has a Serbian Orthodox metal cross that looks like it has been in a fire, a brown sketchbook, and drawing materials. Portly male who looks like he dresses from the lost & found box at your local church or goodwill. Wears glasses sometimes, and seems very curious in an unobtrusive way.

Milos has been a silent servant of Chicago, his new home. He has come to help the Serbian Community of Chicago to reestablish their strength. Milos was quickly recognized by his then Malkavian Primogen Reika Tsudeko Kuze-Hawthorne as a Resourceful kindred for his efforts helping the late, great Toreador Bobby Horsefall combat the H1N1 strain that attacked Chicago in the Summer of 2009. In the wake of the malicious slaughter of Milos' close comrade, Bobby Horsefall, Milos has worked to re-establish Chicago as a safe bastion of the Ivory Tower. Milos was also seen as Dutiful by his then Malkavian Primogen Reika Tsudeko Kuze-Hawthorne for his time filling in for her as her whip.
Milos is currently Revered as the Malkavian Primogen of Chicago under Prince Katja Nothing. Milos has helped the city of Chicago as deputy Sheriff under Simone Randel from time to time. He has helped with the Tzimisce infestation, H1N1 epidemic, the Mikey P search, the former Mayor Daley spiritual upheaval, and many other trials that Chicago domain has experienced.
Milos is a Malkavian electrical engineer, who is a proud patriot of his motherland Serbia and the Ivory Tower. In mortal eyes, Milos is often associated by the Serbian Orthodox Church as a mysterious protector and patron. Some rumors of Saint Milos Obilic visiting the Serbian Orthodox Monasteries are unsubstantiated and unwarranted. He has been seen drawing in Elysium the visions God has graced him with.

Milos was killed on 4/28/2012. He appeared to various people of court throughout the night for 5 second intervals claiming the Brujah and Necromancers are liars. That he is pure. "This is probably the last you will see of us."

All Giovanni especially Marli Giovanni, Emsica (NPC), The ones who commit unholy acts, Those who lack self-control to hide their debauch ways from Elysia, The Sabbat, independents who get in the way of Camarilla matters. Ivan Draginovich, a Bosnian butcher.

The Matrix, the Serbians in the neighborhood I grew up in, Warrior turned religious seer, Nikola Tesla, Science

"Infernalism, necromancy, both against God"
"We are Milos, how may we help you?"

He is the patron saint of Serbia
God healed his tongue so he can speak again. It's a miracle. "Milos went crazy. He ran into a McDonald's and started slaughtering children. We tried to stop him but it was like he stopped time on us. So we had to shoot him down. He then rose back up like some crazed zombie full of lead. He must have been infernal. We had to put him down." as said by various independents and anarchs on 4/28/2012