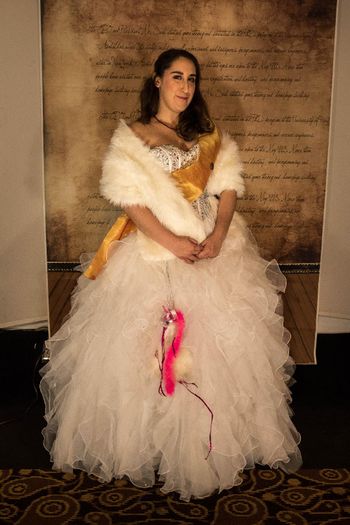 She stepped down from her dual positions early 2021, and decided to move to Phoenix, AZ to help build the Camarilla presence in the area.

"You Can't Get a Man With a Gun" - Annie Get Your Gun
"Shall We Dance?" - The King and I
"She's A Lady" - Tom Jones
"Who Wants to Live Forever?" - The Tenors ft. Lindsey Stirling
"Get the Party Started" - Shirley Bassey
"Our Day Will Come" - Amy Winehouse
"It's Oh So Quiet" - Lucy Woodward
"Black Horse and The Cherry Tree - KT Tunstall
"When You're Good To Mama" - Chicago OST
"Entr'acte/Take Back Your Mink" - Guys and Dolls
"I Know It's Today" - Shrek the Musical
"Night and Day" - Ella Fitzgerald
"It's Been A Long, Long Time" - Kitty Kallen
"The Way I Am" - Ingrid Michaelson
"Somewhere Only We Know" - Max Schneider & Elizabeth Gillies
"We Forgot We Were Human" - Dirt Poor Robins
"Razzle Dazzle" - Chicago OST
"I Dreamed a Dream" - Les Misérables OST
"F*cking Bullsh*t" - Galactic Mermaid (From Carole and Tuesday)
"Woman" - Keshia
"Bills" - LunchMoney Lewis
"Perhaps, Perhaps, Perhaps" - Doris Day
"Who's Sorry Now?" - Connie Francis

"Oh Sugar, no..."
"Excuse me, I have to go be a sneaky sneak and listen to other people's business"
In reference to Leonitis Maclain, Tremere, "If you want to know about flowers, talk to that one. He farts and dandelions appear."
"Yes, yes. Maybe she's born with it. Maybe it's Obfuscate.... like I haven't made THAT joke a million times."
"Ok, so bring a fire extinguisher and a pair of sweat pants. Got it."

Has a love child with the Seneschal of Atlanta.
She has a terrible memory, hence why she calls everyone "sugar"
So far, she has not said "bless your heart" to anyone in Los Angeles
Beyond her genteel demeanor, she has a terrible and colorful gutter mouth. Just get her going and watch.
HAPPILY out dresses Jeremy Reiner on any occasion simply because irking him brings her joy.
Is a hopeless romantic, to the point she's lost all hope of being romanced and loved.
When Maybelline cries in public, the offending party dies shortly after.