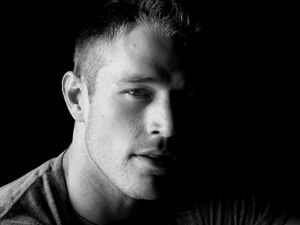 Physical description: Jared stands over six and a half feet tall, with a heavily muscled frame. His blonde hair is shaved short and his face is perpetually clean shaven. A ragged scar crosses a milky white left eye, while the remaining functional eye is blue. Germanic runes are branded into the left side of his face, his forehead, neck and down both arms. An air of violence surrounds him, making him an exceptionally intimidating figure.

Known throughout the domain for his honor and loyalty, this fierce Gangrel has risen quickly through the rank and file. Despite his quiet and militant demeanor, he has managed to earn the respect of many, keeping company with Princes, Anarchs and independents alike.

None that anyone knows of.

"Now You've Got Something To Die For" - Lamb of God

"All Pain Is Gone" - Combichrist

"For Asgaard and the Ivory Tower!"

"When you don't fear death, your enemies have no power over you."

"If the three of us are the last supper of violence, then you should be Jesus."

*Snarling* "Come then Jotuns...die under my axe!" *Followed by more snarling and the sounds of ripping flesh*

"A head stuck on a pike no longer conspires."

"A wounded man shall say unto his assailant...if I live, I will kill you. If I die, you are forgiven. Such is the rule of honor."

Jared is an elder that dates back to the Viking Age.

Jared is plotting to overthrow the Prince of St. Louis and take the throne.

Jared belongs to a sub-culture of Norse kindred who believe themselves to be Odin's chosen.

Jared is an Anarch.