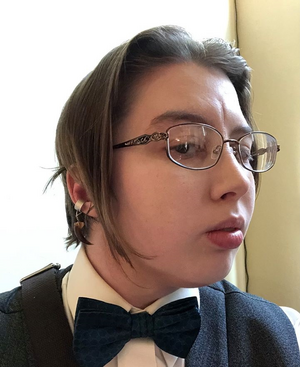 Physical description: Haris is a curvy brunette with a distinctly masculine style, debatably 5'8", short-haired and bespectacled. A vertical white scar stretches from the center of her forehead down to the tip of her nose. She normally wears a white button-down shirt, an old-fashioned vest, a tacky bow tie, a pair of black slacks, and simple black dress shoes. Her hands are adorned with numerous antique rings.


Haris is visibly inhumane, and despite her crisp and clean appearance, gives off a pervasive odor of loamy soil. She sometimes attempts to cover this up with cigarette smoke. Her face is rounded and soft, with large eyes, a small nose, and a small mouth, making her exact age somewhat indeterminate. She gives the impression of someone who'd be religious.

Haris is Greek, supposedly, hailing from the Aegean Islands. She showed up in the court of Sacramento one night and introduced herself, marking her first known appearance in America, but ended up settling in Stockton. Since then, she has traveled regularly up and down the West Coast (and sometimes beyond), making friends, getting to know other Kindred, and doing her best to slither her way into passable acceptance. She seems to have insinuated herself fairly effectively, becoming welcome in several domains normally wary of Setites, and being spotted in such unlikely places as Marconius's 2020 party in Strasbourg.

Being forthcoming and open about her adherence to the Setite faith, Haris has never held a position.

If Haris has bad blood with many people, she doesn't talk about it in public -- save the occasional disparaging implications about some of her clanmates.

None. That anyone knows about.

Milo from Atlantis: The Lost Empire for aesthetics. Numerous heist movie and con man archetypes. A dash of Mike Ehrmantraut. A generous sprinkling of occult nonsense.

"Can't speak for everybody else, but I'm a fellow of poor breeding and poorer taste, so you can offend me freely."

"Oh, I'm sticking to top-shelf trouble if I find any. Only the best."
"Now, I know I need to fuck myself up more, don't get me wrong-- just not for that reason."
"If I was allowed to have jobs, I'd already be stuck with one. Oh, the responsibility!"
"She was playing it so close to the chest, if I asked her to deal me in, I'd already be in her cleavage."
"Alright, gentlesnakes..."
"I'm here to taint your fine venue with my presence."