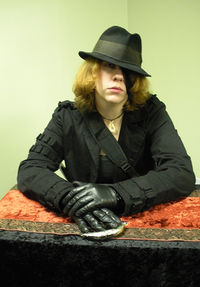 Physical description:Caia is of average height, and usually wears her auburn hair down. The most noticeable thing about her is the ever present, cloth eye patch that covers not just her left eye, but a portion of the left side of her face as well. She is typically seen wearing a button down shirt, vest, jeans, fedora, and a green, leather trench-coat when at gatherings.

Caia arrived in the Domain of the Hudson Valley in early 2005, where she kept a low profile, helping out with research into the methods and tools being used by the growing Sabbat population that had a firm hold on the city of Kingston. By spring 2006, the dwindling Camarillan numbers were no longer sufficient to keep the increasing threat of the Rebellion out of Dutchess county, and the Ventrue elder, Elise Dragoon, then Prince, ordered everyone to leave. Caia sought residency in Westchester, where Rictor Barnes had just stepped up to Prince. He shortly appointed her Primogen, and she remained in that Domain under several Princes. She frequented the Domains of Hartford and the Steel Valley, assisting with a wide variety of supernatural problems, particularly those involving spirits and wraiths.

In early 2008 after a routine trip to Boston to visit the Giovanni, she returned home, clearly inhumane, and clearly troubled. Several members of the domain felt she was a security threat, despite her insistence that she was not, and she soon moved to Hartford where she had more allies. She was shortly appointed to Primogen in Hartford, and held that position for over two years under the reigns of both Stast and Victoria Rowlands, seeming to be quite close to the two of them, as well as Natascia, Eliza, and Marisa. After what could only be a falling out with Victoria, she placed her support firmly behind Anya after a run of Praxis, believing that she had the best interests of the domain in mind, and served as Sheriff for Anya until she was deposed by John Reiss. When Anya took Praxis back from Roman Pendragon, Caia was appointed as Deputy Sheriff, something she seemed to be quite content with, and said that it gave her time to deal with the problems that actually matter.

Mere days after the death of Bree Wolfsmith at the hands of Anya, Caia was reappointed to the position of Sheriff. The very next gathering, she showed up with six new Tremere in tow, saying that they had come to the domain to "help" with the multitude of issues plaguing it. Shockingly, Anya gave them all hospitality, and later that same night, granted Caia Rite of Progeny.

At the gathering in June, Anya, Caia, and a few other allies took action against the bloodhunted Al X, resulting in his silver cord being severed, and the Nosferatu destroying their own warrens. A little over a week later, in the midst of tracking down both Al X's body, which had been removed from the city by the Nosferatu, and his astrally projected soul, Caia was summoned to Memphis. While she was in Memphis, Anya made a public announcement to the court of Hartford that Caia was appointed Seneschal. Within 24 hours of Anya's announcement, Cock Robin announced to the Camarilla at large that he had called her into service as his Archon. Surprisingly, Anya has not yet kicked her out of the domain, though as to how long that will last is anybody's guess.

There are several allies within Hartford that Caia is quite close to, though as to whether it's an official Coterie is unknown.
There are several who refer to a small group of Kindred in Hartford, all women, who have certainly seemed to have backed, if not outright included, the past several Princes, as the "Sewing Circle." 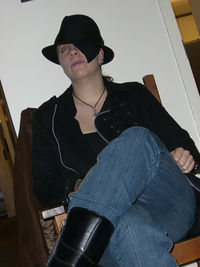 "What are you doing?! We're not fighting to win, we're fighting to give the rest of you time to escape to safety!" Said to Bree with a hoard of Sabbat closing in on the gathering location.

Is a pawn of the Giovanni.
Has been through a harrowing.
Is not just insane, but also delusional.
Once killed an entire Kamut of Black Hand by herself.
Is only loyal to Prince Anya because she is blood bound to her.
Has started a betting pool on how long until her duties to Cock Robin and her friendship with Anya come into conflict and she's kicked out of Hartford.
Is dating Henry Jones, a Tremere Anarch.