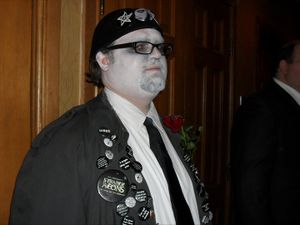 Plaguerat at the 2011 Glitter and Gloom event.

Alias(es):
Joe, Sherman, "Hey, you, with the buttons" according to His Halcyon Excellency, various others known only to other Nosferatu

Plaguerat has served in various positions in the Camarilla, including Primogen, Whip, Scourge, Sheriff, Warlord, Seneschal, Prince, was a deputy Keeper of Elysium at Nonclave 2008, and currently serves as Archon to the Nosferatu Justicar.

Wears a trenchcoat covered in pins. Added a bullseye to the back of the coat while he was Prince of Winchester.

Carries a battle maul with him everywhere he goes.

He recently won a Halloween Costume contest he did not know he was entering.

Plaguerat, despite being an Archon, smiles regularly.

Plaguerat is a misspelling that he's not bothered to correct anyone on. It's actually "Plaquerat", as he is an embraced orthodontist. He was only brought into service to CockRobin to help him with his speech impediment. Problem is, the Justicar mistook what his title was too (and that's not been bothered to be corrected either), as he thought Plaq(g)uerat was an ornithologist. Plaq(g)uerat's entire kindred existence has been predicated on people skimming what they read.

He's only an archon because no other nos wanted the job.

The dispassionate personality is a load of bull to get people to underestimate him. Truth is he loves violence.

He's not on humanity, but his familial features help hide this.

Plaguerat is Jenny Talia's mortal older brother. That's why he puts up with her antics.

Plaguerat is actually an alias used by several people.