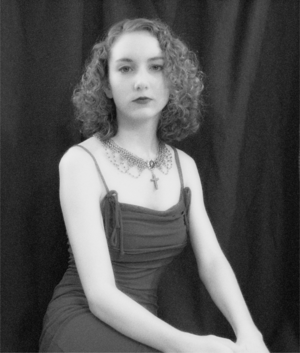 Physical Description: Stella was a short, pale woman with hard-cut features and dirty-blonde curly hair. Her brown eyes usually looked amused, bored, or disdainful. She was most often seen in dark sweaters, black skirts, and a grey peacoat.

Stella came. Stella saw. Stella crumbled to ash on the end of a Setite's boom stick. In other words, more to come.


"Elysium is not merely a place of peace and beauty. It is a cornerstone of our civilization, where we may meet, discuss, debate, and live without the threat of one another devolving into the most basic desires of the beast within... As an aside, it brings me a small bit of joy to hear of Elyisum referred to as "sacred." I can still recall the days when a man who choose to defile what his people called sacred did so at the risk of his own life." - Letter to the Ventrue Clan, 4/9/10

"...We have found a rare, unique, and somewhat humorous piece for your majesty, which we would like to offer in person at your grand affair. It is likely to produce a few raised brows and confused glances--think of the finest representation of the King, in delicate oils, on the most sumptuous of velvet canvas. Then make it more absurd. We noticed your majesty might have a sense of humor." - Letter to Prince Fetus Kevorkian, before Stella's final Midwinter

"Invest in soybeans. They're the next big thing."

To and About Stella:

Written late in 2009 at the departure of Garrett Dannington from the Camarilla.

So, you have decided to leave the ranks of the Camarilla for the excitement of Anarchy! My congratulations, dear sir, on your recognition that the hallowed halls of the Ivory Tower may not have room for a man of your ebullient nature.

Looking back, you see the pattern of oppression--Princes, Elders, Archons, Justicars--they just don't understand your unique situation and needs. Certainly, Traditions and Edicts are fine for the typical Kindred, but you are special. Your cold gaze, hidden behind $700 Oakleys, barely touches your enemies, cleanly sliced by your dual katanas as the wind catches your black trenchcoat. Your spontaneous, dark, performance poetry stirs the soul of at least one woman in the Elysium. You even gave the Seneschal the finger, once, you brave, rebellious soul. Why should a fine man like yourself need permission to possess the skill of Obtenebration? Why not move faster than a speeding bullet as you leap from your Harley into the fray of a mortal gang shootout? Why do you need permission for anything?

Obviously, it is time you left the fold.

This manual, written by an expert in manners and morals, presents the most streamlined and effective way to take your leave of the Camarilla. (You are, of course, ignoring those who claim all vampires belong to the Camarilla. You will show them a thing or two!) While an adventurous spirit such as yourself needs no outside direction to accomplish his goals, you only get to defect once before people stop paying attention, so you might as well make it worthwhile!

Step One: "Stone Walls Do Not a Prison Make" -- Breaking the Trend of Obedience

You may be tempted to write a longwinded, insulting letter to the Ivory Tower as a whole, denouncing your membership--don't! This step comes much later. In order to be effective, your declaration should be preceded by several other acts.

First, you must embrace your inner rebel and choose a Tradition or Edict to break in as flamboyant and scandalous a way as possible. These rules, after all, should not apply to you--so stop obeying them! If you can break multiple Traditions at once, all the better. Perhaps you want to embrace an entire school of orphans and take them on the eleven o'clock news in a city where you have not attained Hospitality. Be creative!

Now, you should not make any attempts to keep these actions a secret. In fact, you should own up to them as the masterpieces of planning and execution you know them to be. The local Prince and his officers are likely to have an apoplectic fit, but you know their reasoning ("It's against the rules!") is wholly irrational and will not apply to your situation. When they lecture you, take one of two actions: remain bewildered at their frustration, or become angry that they, once again, do not understand your needs.

During the aforementioned apoplectic fit, the officers of your current Domain may insist that you have incurred a debt of prestation or that your standing should be stripped. Your initial impulse may be to argue against this, but you are wise enough to resist, knowing what will come in the next step. In a bitter, smug mood, you should instead accept their judgment, stating for the entire court to hear that, despite doing nothing wrong, you are too big of a man to argue over this "stupid issue." You should then leave immediately, preferably rounding up your friends and kicking small animals on your way out, just to show how deeply offended you are.

Having lulled the officers of the court into a false sense of security, you now wait for a few nights...then scribble off an angry, profanity-laced letter to the entire Domain, challenging the Prince's right to levy judgment against your actions. (Important note: we want profanity-laced, not profanity-ridden. We must work up to that level of toxicity in a later step.)

Allow your righteous anger to be your guide in choosing the proper words, but be sure to point out that the Prince is "stupid" and that he only holds power due to your lack of interest in the throne. Point out that anyone who supports him is "stupid" as well, and perhaps "spineless," but that you wisely understand their difficult position as they have yet to "see the light."

Of course, you could face the Prince and kill him if you wanted to. But sleeping on the couch at your buddy's house two states over is so much more in tune with your new bohemian lifestyle.

Now, of course, is the moment you have been waiting for: the chance to tell the whole of the Camarilla what you really think of them. Yet again, you should let your enlightened rage guide you in your writing, however, there are a few points you may wish to consider for maximum emotional and political impact.

Profanity: Now is the time to really let your superior vocabulary shine. Profane and vulgar words should find a place in every sentence, being utilized as every part of speech possible. You may need to write out a few drafts to most effectively include your longest and most creative offenses. Some defectors find this step unnecessary, yet it is worth noting that no one will take your rebellion seriously if you do not shock and offend them to a great extent! Thus, to make sure everyone feels the gravity of your difficult philosophical stance, include every four-letter word you know. Twice.

Tributes: Despite being the tools of a shoddy system, you know one or two good men in the Camarilla. Now is the time to pay your last respects, before they foolishly cling to their misguided ideals and stop associating with you.

Be sure to address them, no matter how elevated their station, in crude street argot. Insist that you will remember them fondly, and that you are deeply saddened that they are not yet enlightened enough to join you on the quest for freedom.

Alternatively, a simple "It's been real, yo," will suffice.

Insults: The majority of your missive should be composed of insults to upstanding members of the Ivory Tower. These can be persons you knew personally or from a distance, but it is also important to include those with whom you have had no prior affiliation, whatsoever. You must maintain the image of being random and indiscriminate, as befits a rebellious, open-minded soul.

The insults should focus on one of three aspects:

1. The person's devotion to the ideals of the Camarilla: Archons and Princes are especially good for this. The more they believe in and uphold the Traditions, the more you should mock them for such foolish choices. One night they will understand and thank you.

2. An action they have taken that you disagree with, especially if in support of Camarilla ideals: This is a good avenue to take up regarding your own Prince and his officers. Bring up how you tried to work with them, but how their narrow-mindedness simply made it impossible for you to remain under their ignorant, tyrannical reign. This will impress upon the true believers that you really are a saint for putting up with these backwards individuals.

3. Something completely incongruous with the actual person: This mode is best regarding a person you have never met. Make pot-shots regarding the appearance, intelligence, weight, or fashion-sense or ladies and gentlemen far and wide. Rest assured, no one will notice if you are entirely wrong in your lambasting. Rather, they will be stunned by your daring and wit, and shrink under the weight of your critical prowess.

Close your letter by insisting that you will never answer a single reply, or even read them.


Step Six: Return to the Camarilla Six Months Later
After all, a vacation is nice, but who else is going to point out when the Prince is wrong?