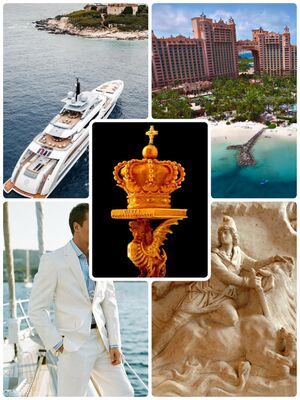 Physical description: Bryce is a clean cut man who, since his move to the Bahamas, favors white linen suits. When at sea, he is considerably more casual than most people would expect a Ventrue to be.

Bryce was embraced in Manhattan in 1987, by Erik Khristenko, a Ventrue tracing his lineage through Tiamat. Prior to his embrace, Bryce had no knowledge of the supernatural world: he went from Harvard Business School directly to Wall Street, where he quickly became a junior executive at a prominent firm. He was engaged to a sophisticated, upper class girl, and his future looked bright - until a Ventrue decided that he would be useful.

For almost three decades, Bryce remained under his Sire's accounting, serving and supporting Khristenko's needs and political ambitions at the same time as the fledgling learned about the Clan and the Camarilla. For the second time in his existence, his world was rocked by the unexpected when, in 2014, Bryce's sire was killed by enemies within the Clan.

He was adopted by Tara O'Brien, who saw him through the completion of his Agogue, but he did not become publicly active in the Camarilla until 2018 - perhaps out of fear of his sire's enemies. When the Domain of Cambridge, Massachusetts was established by Prince Alshaya, Bryce sailed a Yacht up the Charles one evening, conducted a few meetings with Harpy, Prince, and other Ventrue, and emerged Primogen of the Domain. Not long after, he was seen providing aid to the Camarilla during a battle in the Bahamas.

On Thursday, December 19th, 2019, he announced his claim of Praxis over the Bahamas, and that the former Prince, Jeffrey, had stepped aside and was supporting his claim. By the 27th, all other contenders had stepped aside, leaving Bryce's claim over the Bahamas uncontested, and it remained uncontested by any member of the Camarilla for the entirety of his reign. In August of 2020, the first real challenge to the stability of the Domain came in the form of a great disturbance in the world of the dead; with the aid of members of the Camarilla from near and far, Anarchs, Giovanni, and other independents, the islands stood firm.

In December of 2020, the Bahamas celebrated the first anniversary of his Praxis. Shortly after, he was seen on the Island of Yiaros, in the Aegean, contributing to his Clan's efforts regarding the developing situation of Budapest. In August of 2021, the offensive against the Sabbat in the Commonwealth of the Bahamas ended in a short lived victory for the Camarilla, when the Domain was betrayed by the villainous Samedi, Hardy. With the Domain no longer tenable, Bryce, and the rest of the Domain, left the Bahamas.

In Search of A Purpose

When Prince Imran Alshaya asked Bryce to serve as his Seneschal in Cambridge, Bryce accepted, though it is clear he still considers the Bahamas his home. In his own words, he has 'tried to help where he could,' in the absence of any particular direction these nights: he has lent his efforts to the Budapest conflict, and to the Camarilla siege of Boston.