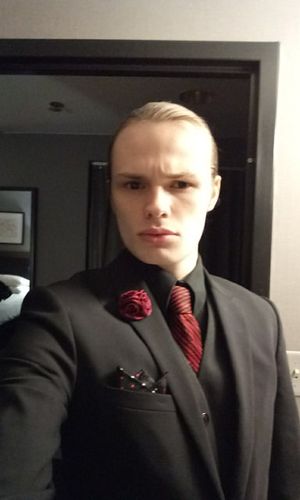 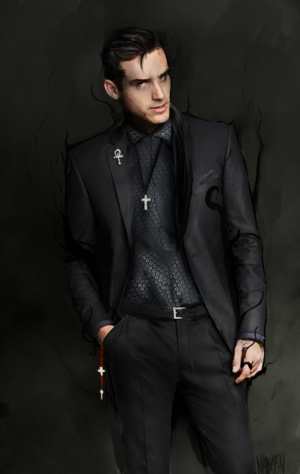 Harbinger of the Abyss

Physical description: Thin and pale, Reyes has long black hair which is drawn back and tied in a ponytail. His features are sharp and starkly of Spanish heritage, with a very young-looking face, despite his sunken eyes. Somehow, it always seems as if he hasn't gotten enough sleep.

Without Mask active, his path is apparent. Furthermore, his eyes betray a strange inhumanity; the irises of his eyes are purely black, as if windows into a starless night.

Despite his beauty ((Gorgeous x4)), he is supernaturally disturbing to be around. Lights dim and flames flicker and die in his presence; the air chills and the shadows move and claw at his personage. Even the long black frock coat that drapes his shoulders seems sinister, as onlookers are unable to see it's back; only endless darkness. His presence is undeniably Abyssal, which conflicts wildly with the aura of Piety and Faith he exudes. Kindred in his presence tend to wince and keep their distance. Presumably as a result, he usually lurks and broods in corners and in the back of rooms, all too aware of the discomfort he causes.

Loyal by Merit of His Blood

Lightbringer by Montano of Clan Lasombra

Revered as Primogen of Lake Lucy

Valorous as Legionnaire of the Ivory Legion

Emerging from the shadows in Tampa, Florida around 2018, he has served many of the local domains in the hunting and removal of Sabbat, Infernalists, and Demons. Defending against several Sabbat attacks and surviving combat with at least two different Demons, he accumulated much of his status in Tampa. At some point, Reyes left Tampa following disagreements with certain Camrailla Kindred. Only a few know the specifics of the circumstances, but for some time Reyes did not step food in the Domain of Tampa Bay. He made his home in Port Charlotte for some time, serving in some unknown capacity to Prince Reiner Kruger. When Prince Reiner closed off his Domain to outsiders, Reyes was one of the few who still was permitted within the Domain.

Reyes then visited Baltimore during Glitter & Gloom 2019. His shadowy presence was felt throughout, although it is uncertain what he actually did. All that is known is that after the event, he was made Servire to the Archon Hannah Martin in service to Justicar Art Morgan.

After becoming Servire, Reyes has continued lurk in the shadows of several southeastern Domains. He returned to Tampa and assisted in the Destruction of an infernal Sabbat Lasombra, and has continued to been spotted occasionally in the domain since. He has also been seen in Georgia, although to what end, no one can say. The general theme of Reyes' presence seems to be that he does things quietly in the Shadows, at the behest of Princes, Archons, or Elders. His motives are oft unknown, although he has been rumored to be the Hidden Scourge of at least three different domains.

With the Destruction of Prince Harlock of Lake Lucy, and the Praxis Seizure of Anmuxa Gamli, Reyes can be found looming in various places throughout her Domain. He currently acts as Primogen there, for clans that do not traditionally have Primogen (Ravnos, Catiff, Settites, etc...).

Reyes is quiet about his history prior to coming to Tampa. Asking him about it seems to be met with sad eyes and deflection.

The last several years, Reyes has been seen in many domains across the country, investigating some strange occurrences. Seemingly on edge, he searched franticly for something, before going missing for almost a year. Suddenly returning to the spotlight, Maxwell Reyes led a small party in an attack on the Brotherhood of Rafazi, gaining the status of *Lightbringer from Montano of Clan Lasombra. Shortly after, he joined the Ivory Legion.

The people he has been seen working with most closely in the past...

Known only to the Prince who acknowledged him; Reyes does not speak of his Sire.

None he speaks of

The Man Comes Around - Johnny Cash [2]

"I do not kill innocents; fortunately, no Sabbat is an innocent."

"It is the Sabbat who betrayed our clan. Never call us Antitribu again." - Reyes, when asked why there are so few "Lasombra Antis"

For great is your steadfast love toward me; you have delivered my soul from the depths of Sheol. Psalms 86:13

- Dislike Anarchs, to the point of considering them Sabbat.

- Wears all black only because he's colour-blind.

- Flays himself each night for penitence.

- Has a raging hard-on for God.

- Seems to ally himself with Assamites

- Is either slowly going insane, or was already insane to begin with