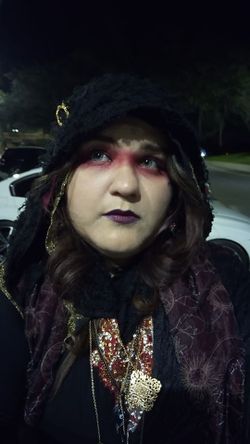 Physical description:
Anmuxa has a relatively small, lean, unimposing build, though it is often concealed by the multiple layers of clothing which she very often wears. The multiple layers worn are typically enough to nearly cover all of her ebony skin save her face, which she covers through various means typically. Her long black hair is typically pulled up in various braids during formal functions or during times of expected conflict, otherwise is worn down and in loose curls. While her steps are quiet, her presence is usually announced by the jingles of all the various eclectic jewelry and charms she wears.

Not much is known about Anmuxa Gamli before she turned to the Camarilla with the Schism. Even as an Acknowledged citizen though, the woman and her brother were nomadic within the Camarilla, content to explore the states for the time and offer their services to the various domains they would visit in their travels. They hoped it would help build better working relationships for themselves and the others who now called the Camarilla their home.


Their travels effectively came to an end when they arrived in the domain now known as Lake Lucy. The evening of their arrival into the domain the two were pulled aside by the Primogen Council of the domain, requesting them to remain and to accept positions within the Court. The same evening she was granted her Hospitality by Prince Casamir Harlock, Anmuxa Gamli was named Keeper by him as well.


During her time as Keeper, Anmuxa frequented other local domains, eager to learn of them and aid as she could. She quickly made a name for herself within Tampa and worked closely with Vincent Croft, of clan Tremere, while he begrudgingly served as Sheriff for the domain. Despite the certain political shifts to inevitably come to Tampa, the pair worked closely with other and their local respective clans to unravel the various oddities in the domain.


Every so often though, when there was time and a need, Anmuxa would travel to Port Charlotte as political turmoil boiled over. Sitting in the shadows of a corner of the Prince's office, she watched as Reiner Kreuger quietly seized control of Port Charlotte with a simple but firm one-time offer. With the political scene cooling, Anmuxa offered her services to Prince Reiner Kreuger and his domain.


Between each city though, Anmuxa found the Camarilla to be facing a common theme of enemies: Demons and their followers.


Until nearly the end of the year, Anmuxa tended to Lake Lucy and the Elysium. During this year, the domain faced extreme hardships including attempting to match wits with a large group of Changeling, Fallen, Garou, Hunters, Infernalist, and Mages. Despite efforts, the Elysium came under attack and was ultimately lost due though everyone attending the gathering was collected, saved, and sent on their way that evening. Despite successfully saving those who were within and even working with those in the domain to ensure the Masquerade was upheld, Anmuxa resigned shortly after from the position of Keeper. Regardless of her stepping down though, the Assamite was still keen to remain at the forefront in combating the issues which plagued the domain, fighting a Fallen and seeing to it that sixty-six demons remained sealed away.

Political shifts and changes in Tampa had been announced with the new year. At the first gathering of the year, Anmuxa was announced as the Seneschal of Tampa. During her time as Seneschal, she defended the domain fiercely, though at times it would show she was indeed new to such a position, its responsibilities, and the social boxing ring.


While Seneschal, Anmuxa defended and mobilized the domain against Sabbat forces which attacked the domain, asked for aid from her clan to defeat an ancient infernalist and its patron, organized a strike team to move against another infernalist within the domain, coordinated the dismantling of the networks established by both Sabbat and the infernalists, and the rescue of multiple elders of the domain. By the end of her first six months as Seneschal, Tampa had become much more quiet.


Despite her efforts focused into Tampa, when a moment could be spared, Anmuxa would continue to visit other local domains to offer aid and advice as she could, seeking it in turn against what she faced in Tampa. This included the budding domain of Palm Harbor under Prince Brant Eldrusson.


As all the local domains began to settle and grow quiet once more for the most part, a particularly violent corrupted storm spirit in Tampa attacked her broodmate. Unable to protect or save him, she and the rest of the local Assamites watched as he turned to ash. The woman secluded herself for a long while, only coming to gatherings to remain on their edges.

As Prince Casamir Harlock looked to those attending his gathering pressing if anyone had anything at all to say, Anmuxa rose and approached, declaring for him to hear that she was contesting his praxis. Within the blink of an eye, the contest was resolved, ending with Anmuxa cutting through Casamir Harlock with a green fiery blade.