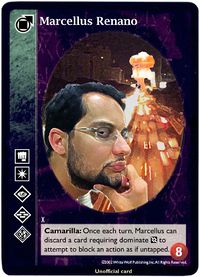 Participated in the attack known as Zona Cero.

Participated in the killing of Zymboo.

Dux Bellorum of São Paulo since 2012.

Participated in the battle against the demon Cega in the "Year of Fire".

"Nobody expects the Spanish Inquisition, Dmitri"

"Release him, Assamite!!! (to a Child of Haqim Elder)"

"You can always trust in a tremere, Tudor, my friend"

"I did not know you were versed in the occult world, Seneschal." (To Rafael Tudor, ventrue)

"My what? You sick weirdo..." (to Timothy Bassaloth)