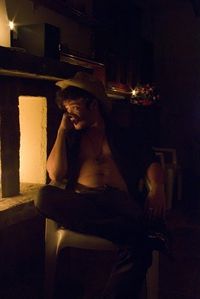 Physical description: Short, athletic and thin, Hagnar's is a sort of frail lad. Has brown hair and deep enigmatic violet eyes (just as Valerie de Lamare). The hair is a bit disheveled, but it is an "intentionally disheveled". His features are delicate, almost fragile, marked contrast with a strong chin: it is clear he descends from a people with dark and fine lines, something Indo-European. There is a child's air in his smile, so friendly and warm.

He is peaceful, and rather uses his words than his claws. Because of it, he is commonly called a coward, or even “pussy”.

Hagnar has passed two hundred years in São Paulo. As a scholar, several of his pseudonyms can be found signing documents of USP (São Paulo’s University), during this college’s history. Nowadays he still teaches the history of art and folklore, but left USP to maintain the Masquerade.

Hagnar was raised by Valerie de Lamare and Thinka PhuriDae, and what he knows about the Toreador Clan is almost what he knows about his own Clan. Some Gangrel usually to think that Hagnar is not Gangrel, and that he is Valerie’s GrandChild, not Thinka’s.

Hagnar is a São Paulo lover – is easy to find him in clubs, museums, parties, galleries, vernissages…

He is known by many gypsies as a brother (Phral) and protecteur, as he fought many battles with them. Also, his luck is uncommon – maybe it’s a blessing given by one of those old gipsy ladies that he usually takes care of. He faced the Demon “The Blind” to protect a child. He also faced Mahara (Setite Elder), Sycorax (LaSombra Elder) and, for political matters, Nathanael Van Hooves (Ventrue Elder) – if he wasn’t that lucky, probably would be dead.

Sometimes he contacts werewolves – even knowing that they don’t like him.

It's common to see Hagnar adopting younger Gangrel as his own Childs. Actually he mentored many children, even some unprotected/abandoned Anarch children.

Hagnar fought the Fist, and several times against Sabbat minions in Brazil. He fought and destroyed the Paladine Nikita, all by himself. He participated of Aurella Vykos’ destruction, and also destroyed a Bishop named Lucien Varro. In fact, he doesn’t like to hurt anyone or join fights of any type.

Hagnar was kidnapped by Doutor (a Tremere, Child of Margot Matahari) and his two gargoyles, under the Prince’s permission (at that time, Julian McArthur, a Ventrue). Alejandro Montoya has destroyed an Elysium to reprehend McArthur, and the Tremere Chantre where Hagnar was jailed – and gained a bloodhunt because of it. Hagnar has a personal debt with him.

During almost a year, he was a Tremere Clan’s “puppet”. After Doutor’s destruction (during a Tremere conclave), he went back to his normal thoughts. No one knows what he learned from Doutor, but he has several problems dealing with Tremere and Ventrue till today.

Hagnar spent a whole year away from São Paulo, living in the woods. That's because somehow his mind opened to an Sabbat's Archbishop. He spent about a year fighting it by himself. He only returned to the fellowship of other Kindred when he was sure there was no trace of this "third eye" in his mind. In addition, he passed through a mental research of Camarilla Elders, the Tremere Clan and the Sheriff. Somehow, this mystic bond was broke.

Hagnar’s politeness is due to his Toreador mentor, Valerie de Lamare. Some say that after her destruction (by the Sabbat), his eyes were never the same – he is always looking to a distant point. He assumed the surname "Lamare", promised never to use again his rose brooch, and also that he would never refer to São Paulo as "beautiful" ("Bella") again.

He went into a depression when his cousin, Alejandro PhuriDae, has died. They were really, really close, strangely attached to each other.

Hagnar was really engaged on São Paulo’s politics when Thinka PhuriDae (his GrandSire) was under a bloodhunt. When Thinka’s bloodhunt was revoked, he decided to retire for some time, to live again under Thinka’s protection, hearing to her old histories.

He has been into all of the possible Camarilla positions in a city's court, all but Scourge. He really would not accept that position, as he would not hurt any unauthorized (yet innocent) neonates, and this is just one example. He took the Práxis just to cover the absence of his Ventrue friend, Rafael Villa Real Tudor. When the Brujah Hope decided to take the Práxis, Hagnar accepted his arena proposal and no one has ever heard what has happened after it - the point is that no one was destructed, no one got really hurt. Some hoax-addicted may say that Hagnar won the arena in a complete Social challenge, and then gave up. He never wanted to be a Prince, anyway, but would not allow such dishonor without fighting back and letting everyone knows what he was capable of. Maybe he was just using that point as an alert to future challengers.

Never trust Hagnar’s words; although he is honored and had never betrayed a true friend, his mortal bloodline is descendant of a Rom family. He can be sweet, but he knows how to use your own words against you.

Sycorax (maybe she didn't know even who he is, actually)

http://www.youtube.com/watch?v=_-QPvffO1gs
It's no Good - Depeche Mode

http://www.youtube.com/watch?v=RERrvKaq3yw
Your Hands on my Skin - DeVision

http://www.youtube.com/watch?v=mAqK4dElUEI
Join me in Death - HIM

http://www.youtube.com/watch?v=AnxA0_Wns0k
I See You - General Base

- I loved you as I never loved anyone but my Children… - Lady Valerie de Lamare, about Hagnar.

- There’s no distance to us, broher. I’ll come back, as I always do. – Alejandro PhuriDae, before leaving Hagnar in a party and die some hours after.

- If I knew you would turn into this weeping baby, I would kill you instead of giving you the Embrace. – Yasmin the Valkyrie, his Sire, about his feelings for Alejandro’s final death.

- Hey child, sometimes to fight is our only option. Protect yourself, then you will be able to protect the ones that you love. – Yasmin the Valkyrie, giving to Hagnar his throwing knives back.

- I’m watching you. This is for being a shame to my lineage – don’t you dare to heal this wound, carry this like a reminder of your dishonor. – Thinka PhuriDae, after breaking a bottle on Hagnar’s face.

- If that is not subject to a Harpy, I relinquish. - said Hagnar by punching the table and turning his back to a Blood Knight, Ventrue Archon, who said werewolves do not exist (when they were about to attack the Elysium).

- Pussy cat.. but cats can scratch too… - Alejandro Montoya, about Hagnar.

- Look, my dear, nature is diverse. There are predators that attract their prey by pheromones, by multiple colors ... Do you want me to hunt you? I could hunt you, then you could draw your own conclusions about my qualities as a hunter. – Hagnar, just before sending a kiss to a younger Gangrel, that asked about his “strange” way of unlife as a Gangrel.

Some say that Hagnar is following his way to Golconda.

Some say that Aurella Vykos had a crush on Hagnar, that’s why she tried to recruit his services for the Sabbat for so long.

A Gangrel named Selvagem took Hagnar as a pupil, against his will. Result: after three months, he took his mentor to an Elysium, wearing black tie.

He is usually cherished by anyone in São Paulo.

Some say that Hagnar’s bohemian manners are very close to some of the Sabbat’s beliefs.

He can be paranoid sometimes, and commonly finds unusual ways to escape when feels trapped – it looks like circus ability.

His mortal bloodline descends of the Rom, so he claims that can see the future.

He knows secrets about São Paulo foundation and the Elders' alliances.

He joined the Sabbat.

He is a Toreador, infiltrated among Gangrel.

He can contact Faeries and has no fear of any Garou.

Hagnar in fact is Anarch, and only watches what happens into the Elysium.