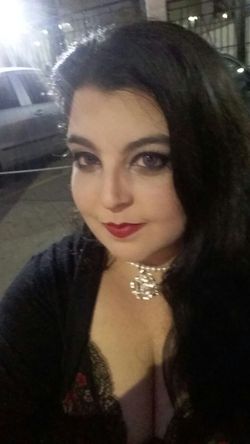 Mégane as portrayed by player

Pérola Fleury - the name she uses among mortal society since 2016

Terpsichore, the Masked Dancer - stage name she adopted since 2016

Dancing Rose - the name of her artistic productions company

But she can look younger or older than that, depending on her attire and makeup

Physical description: Mégane’s appearence is that of a stunningly beautiful girl in her late teens. Not tall (5’25), with a rather slender yet curvy figure, however rare this might be for a ballerina. She has pale, porcelain-like complexion and long, loose raven curls. Ever smiling, her face is delicate and doll-like (whenever she isn’t wearing makeup, she looks even younger than her apparent age), with rosy cheeks, crimson lips and big, deep violet eyes,

Fame x4 as a performer and artistic producer 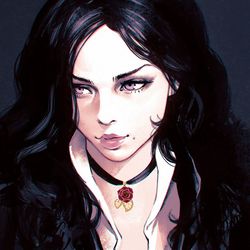 A proud Artiste, through and through. Mégane was discovered in Paris, where she used to be one of the most promising ballerinas in the Opéra de Paris under the stage name Blanche la Fleurette. She often boasts about her many artistic accomplishments and the many operas, ballets and musicals she starred as time went by. One of her favorite things to claim is that she was the first French Odette and Odile. C’est-à-dire, she was the one who starred the Swan Lake ballet in its first Parisian rendition.

As for how she treats the others, Mégane is loving and ever-smiling, treating most people by tender nicknames and seeming to genuinely care about everyone. She seems to always be surrounded by people, as expected of such a charismatic extrovert. Her accent is always present whenever she speaks, although it might be faded or not, depending on how much time she’s been spending with her family lately.

Margaery Tyrell (A Song of Ice and Fire)

March of the Toreador – Bizet’s Carmen

Passion and the Opera - Nightwish

When You’re Good to Mama – Chicago

Show Must Go On - Queen

-Yes, a good memory usually comes with grudges. And my memory, my love, is great.

-I only look like I’m made of porcelain. It’ll take much more than that to strike me down.

-Power, for me, is having a crowd before me, clapping and screaming for me. This is the type of power I always cared about.

-Thank you for trusting my sanity that much.

-She was very close to her late cousin Ames de Lamare, who was outted as an infernalist shortly before his final death. No one seems to question whether she knew about it before or not, but even if she didn't... how much of his influence still remains in her?

-She was once kidnapped by fairies.

-She actually fucked a fairy.

-She basically fucked her way to the throne of São Paulo

-All of her officers were actually her lovers

-She vanished into thin air while she seemed to be living her very best moment. No one seems to know why.

-She was secretly murdered by Carola Van Hooves

-She was once again kidnapped by fairies or whatever