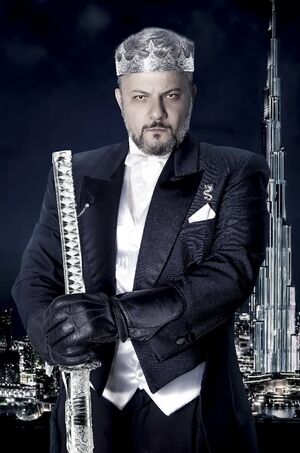 Physical description: Medium size (1,77m), age around 45, shaved head (when not white hair), yellow eyes, white skin, athletic and physically strong. Behaves like a gentleman no matter what, even when cut somebody´s head. He has a true king aura, inspiring aspect for those loves politeness and battle. Always perfectly dressed in social occasions, and like any elder of clan of Kings, in his private space, anachronism talks high, dressing clothes and armors of his early age.

It was one of the few Ventrue that really were a king in the mortal life, a successful swordsman and Warlord as well. Ackowledge by Hardestaad itself in the very first night of Camarilla sect, King Albrecht helped the clan in the meetings and planning before to found the Camarilla and others main events in Europe like Anarch Revolt, Inquisition and much more deserving his reputation between his fellows clan mates and sect: The Hero King.

Claim Praxis at 1530 bC, he founded the very first Princedom in the Americas, in the South America for unknown reasons and keep until these days. Its one of the largest and oldest Domain in the world. Today his domain include part of Brazil, Argentina and Paraguay and this is not a coincidence. Kindred of the Kingdom- The Domain of the Triple Border are likewise European Kindred (French and British style), very different from their distant americans nighbors Kindred. He is known for being the Prince with the highest stati in South America and Karibean. His lineage is the most respected, all his descendants are very well selected to Embrace, all known to be extremally smart and in certain way, heroic.

The King and allies faced and defeated a huge list of enemies of Camarilla, enemies of Ventrue clan and another terrors in the world of Darkness unknown by the most Kindred. Undefeated for centuries because his brotherwood and wise leadership. In the last decade a Ventrue anti tribu faction were eradicated for while. Infernalists, Voivode Tzimisce, Baali and much more had a tragic end in the South America.

- Success isn't a result of spontaneous combustion. You must set yourself on fire.

- Obstacles are those frightful things you see when you take your eyes off your goal.

- It is double pleasure to deceive the deceiver.

- Never was anything great achieved without danger.

- Princes and governments are far more dangerous than other elements within society.

- Excellence is not a skill. It is an attitude.

- Every king was once a helpless baby & every great castle just a draw on papyrus…its not where are you today, but where you´ll reach that counts.

- He who wishes to be obeyed must know how to command.

- Even death is not to be feared by one who has lived wisely.

- May God have mercy upon my enemies, because I won’t.

- All men can see these tactics whereby I conquer, but what none can see is the strategy out of which victory is evolved.

- Invincibility lies in the defense; the possibility of victory in the attack.

- The good fighters of old first put themselves beyond the possibility of defeat, and then waited for an opportunity of defeating the enemy.