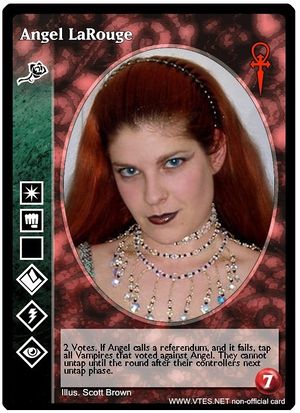 5'4, around 125-140 lbs, Vivid green eyes, bright red hair. Her eyes would remind those that knew them of either Black Mariah/Anna Nevermore or Griffyne Lake. She wears mask; when it is broken the viewer can see that she has quite a few scars: her hands are scared, and appear to have been broken a few times in her mortal days; she has scars on her face and a huge one that transects from under her right ear to her left ear, across the trachea.

Angel has been on the West Coast since 2004. She has served as a Harpy in a couple different domains, starting first in Stockton, CA and then again in 2007 in San Francisco, CA She has also served as Assistant Sheriff in Stockton (2004) and Seneschal in San Francisco under Daniel Book.

She is known as being politically devastating, and has in the past had quite a temper. It is known that if people mess with her clan they end up having to tangle with her.

She assisted Jordan Restax in gathering standing for a conclave wherein Shade was to be put on trial, however that fell through when the DMH turned Shade over to His Arbiter de Eleganciae.

She assists in throwing the annual Grand Elysium in May every year in San Francisco, and hosted the Petronius Roast on her Justicar so Clan Brujah could have a crack at him after the disastrous Conclave held in 2008 wherein he was a bit of an ass to the clan.

She moves a great deal behind the scenes and is considered someone to send new trainees too for Harpy goodness.

DECEASED IN May 2013, Destroyed by Elias Beecher.

They vary.. they know who they are.

They DEFINITELY know who they are. Or do they?

Archon Griffyne Lake, currently in service to Her Power Lucinde

This varies: Currently: "Fake it" by Seether, "Orchid" By Alanis Morisette, "What if" by Emilie Autumn, "Glitter in the Air", Pink, "Bullet Proof Skin" by Institute, "Gypsy" by Pharoah's Daughter

"I would rather bathe in their spit than wander in the desert without them" -Angel in regards to her clan and their fickle ways.

To Angel: "So what is your coterie called?" Angel's reply "the West Coast"

"Don't fuck with Angel" - The Anarchs

"... That is really unfortunate... care to move to SF? The only thing you have to endure are my Prince's speeches...." Angel during the reign of Daniel Book.

Amelia Vadeboncoeur -"I don't keep a calendar based on your sex life Angel.." Angel LaRouge- "If you did, it would be rather empty.."

"Jack the Barber is in the midwest somewhere, harassing Victoria Hunter, he doesn't care about the West Coast.. he probably doesn't know we exist.. don't worry about him. You are fine." - Angel in a clan meeting during a May Grand Elysium while unwittingly sitting next to a disguised Jack the Barber.

Rumored to be the "Real" power in SF. Rumored to want to torpor whomever keeps saying that.

Called the "Queen Bitch of the West Coast"

Rumored to have put her own Childe in a box for missing a casting call during the May Grand Elysium in 2010.

She is known to have a temper, but is also known as level headed.. maybe people are just confused.

Rumored to have said that she will gleefully murder anyone who tries to dethrone Prince Deems because she doesn't want to be Prince.

She is rumored to hate the Tremere and the Setites.

Her hobbies seem to be assisting with parties, pointing out the obvious to the oblivious, and harassing Preston DeWinter and Duncan Hardwicke.

Justicar Petronious liked her more when she was mute.

Has a secret, shameful, and forbidden passion for Amish quilting

Once bested by a Nosferatu when it came to dressmaking

During the funeral for Geoffrey Tanner she got punched in the face by Melody Copper . When she was asked later, Angel said she thought it was adorable.

Overheard at Sacramento Court after quipping about the Tremere: "Wait, are you Tremere?" (The Tremere nods) Alecto: "awkward."

While she was dying at the hands of Elias Beecher, her niece Marlene was singing Fever back at the gathering place.