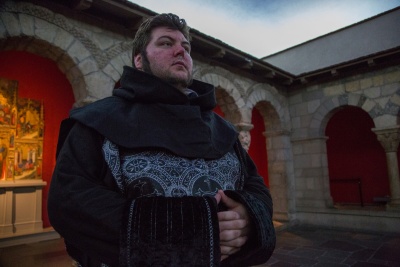 Physical description: Ezekiel is a tall and stocky man. Brown hair and green eyes shows his mottled decent but overall comes across as quite Russian in nationality. Usually wears a button up striped shirt over various t-shirts and blue jeans, though can sometimes be found in full monastic vestments that are a deep ebony with silver inscription.

Zeke is from an interesting time in History. He has spoken of his time in the Soviet Union as an espionage expert stationed in France during the cold war. During this time he was tasked with intelligence gathering as well as assassinations on key political figureheads. Once embraced and the Soviet Union fell he retained his past contacts but moved to the America's to get away from the corruption of his own organization.

Once in the America's he laid low on the great lakes and set up a gun smuggling operation that garnered him much fortune, while also creating many ties but all of that ended during the year of fire.

Ezekiel was first noticed during his time during the Year of Fire when confronting the aspect of "Belial" within his home domain. From here on out it is known that he turned to faith for comfort in the darkest of nights.

He has since gone on to fight against many major threats being the major player against the red mist with the help of Deidre and others from the Domain of Cleveland and Toledo.

For a small stint after that Ezekiel held an Archon position beneath former Justicar Cockrobin of clan Nosferatu. During this time there was turbulence and he was relieved of his duties after no major investigations.

For a year he was unseen and was considered missing before returning in order to help against two Fallens that were causing havoc within the Domain of Cleveland under the Prince Marco DeMidici. Ezekiel was successful in sealing away two Fallen at this point in time.

After this incident he returned to Toledo and claimed praxis successfully where he currently resides as the Prince.

"I am a man of faith. Faith guides my blade; I will strike down the wicked. You have not been deemed wicked by the LORD on high, and thus I will show you mercy." - Ezekiel's encounter with a hunter.