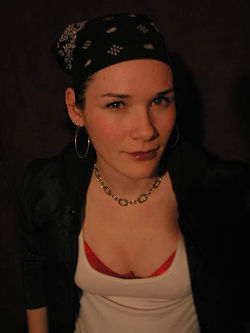 Concept: Original: A character that will die within 3 months. Now: Weathered Shit-Kicker with Style

Physical description: A hot-to-trot neo-punk with chains, spikes, combat boots, and the tease of a red bra strap or thong string. Usually seen sporting a bandana and a shit-eating grin. Rubble & Dust covering not included but available as an additional accessory. 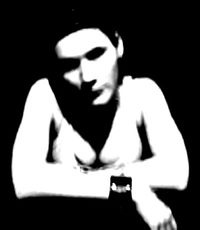 Marissa originally arrived in the Hartford domain during the reign of Svetlana Cheakov. She spent most of her time with the Brujah, particularly Richard Blackburn and King, getting drunk and causing trouble. She spent her time away from the Brujah antagonizing the Prince and fighting the system, making a mockery of the Camarilla's sit-down philosophy against the Sabbat and willy-nilly prestation system. After a few months, rumors circulated King had gone Sabbat and Marissa let a little of her harder side show. During the reign of Austin Matthews, Marissa began taking the Camarilla a little more seriously and instead of rallying against the system, she rallied to make it better.

After a betrayal of a clan mate caused the death of her Prince, Marissa was forced to dispense Clan justice, but details are scarce. A short time later, her closest ally, Blackburn, was discovered to be infernal and after a failed Praxis seizure by Blackburn, Marissa found herself in a position of Clan Leadership.

During the reign of the Malakvian Prince Stast, Marissa served on an all female Primogen council with the likes of Natascia and Victoria Rowlands (then Vivian Davenport) and Caia Wickham. Rumors began to circulate that Stast was a servitor of the Sabbat at least half the time, Marissa began to fade into the background. Not wanting to face another ally descend into treachery, and because the pool of likely Prince candidates was growing frighteningly thin with her name still attached, Marissa hit the road.

Marissa reappeared in Hartford for Anya's call to arms to fight the Sabbat. After seeing the city fight together under a seemingly stable Prince, Marissa was easily convinced to come home. Some whisper Marissa has "grown up" a little in her travels. Rumors of fighting Sabbat in South America and aiding Prince Grainger of Dallas in some way seems to have infused additional wisdom into the once petulant neonate. A testament to her new found strength, she has even been seen with a child still under her accounting.

Rumors say the all female Primogen Council of Hartford was a coterie once upon a time...

...and a lot of dead vampires.

A Quick and Dirty PC, meant to die quick, while another concept was developed. (Nice work, Jenn)

"I'm calling you a fucking idiot to your face and you're giving me status!?" - to Prince Chekov in Elysium

"Really!?! Bickering over who has the bigger mortal cock? That's peacetime crap."

"I've got badass muscle coming out of my ears and god damn it I'm ready to pave highways. The one thing I don't have is the fucking patience to deal with this backstabbing BULL. So what's it going to be? It's time to get back the fuck to work."

"I will not buy this throne in a back room with idle threats and bluffs. And I will take it by blood if that is the rightful honor that Jasper seeks." - Last of the Camarilla's dying honor.