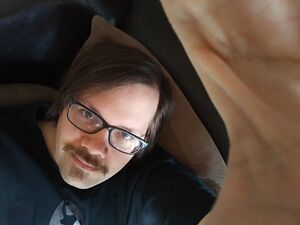 Upload John, attempting to be cool.

Physical description: John is a young man (early 20s) who has medium-length brown hair cut in a somewhat 'emo' fashion. He is of average height and weight, with brown eyes and pale complexion. He usually wears a pair of thick-brimmed glasses, which completes the 'hipster' aesthetic he's attempting to pull off. John usually wears black t-shirts with various prints on them. John also has an almost permanent smirk of mischief on his face.

Much of John's early history is not publicly known. While he has stated everything from being a native Mainer to being from South Africa, actually pin-pointing his life before the Embrace is difficult. The only real consistent story he has is that he was either studying to be a teacher in college or was a teacher by the time he was Embraced.

John has gone on the record stating that he was Embraced in a Camarilla city that was under siege. He doesn't know his sire (or refuses to discuss it), and publicly presumes them to be dead. He has yet to speak about the specifics other than that he had "no choice in the matter", would have "probably chosen not to have been Embraced", and "regrets pretty much everything to do with the whole thing", but whatever the specifics might be seem to have deeply effected him.

In August of 2015, John arrived in the city of Portland and presented himself to Prince Andrea McDermott. He proved to be something of a trouble-maker, frequently heading off from gathering to "look for fun". Said "fun" usually included run-ins with various other supernatural creatures and once with a group of Neo-Carthaginians. He was prone to lie about these meetings to the court officers, who would punish him accordingly. Deborah Parker, a member of the Portland Court in high standing, took John under her wing, and while this improved things for a little bit, John would return to old habits soon after. Having the impulse control of a 12 year old, John would continue his disruptive behavior until January of 2016, when he attempted to make a deal with some fairies which caused the near deaths of three mortals. After an investigation and public humiliation in court, John went missing for over a year.

Between early 2017 and 2018, John would make the rare Gathering in Portland. A somewhat less precocious, albeit still immature, Kindred than in 2015, John would make outrageous claims about his advancements in blood sorcery, much to the dismay of everyone around him. It was around this time that John adopted a raccoon who called itself "Fernando, Lord of Pizza", which soon became one of John's closest allies.

In late 2018, John was part of an investigation into an alleged mass embrace in Portland. When it was discovered that 30 people had been turned, John pleaded with the court of the city to ferry out the bodies to other domains; he claimed that they were innocent and didn't deserve to die. John even was able to speak with one of the shovel-heads, who proceeded to beg for mercy from those around them. However, his idealism fell short of the reality of the situation, and the shovel-heads were incinerated. The whole event was emotional for everyone involved, but John was incredibly affected by it. He would go back to seclusion for another year.

In mid-2020, John arrived back onto the scene. Ever the angry young man, John had a public meltdown at gathering, bringing up the shovel-head event and seemingly blaming the court for its handling of the situation. While Andrea McDermott tried her best to explain the situation, John was either unconvinced or simply didn't understand what had actually happened. He left in something of a huff.

While John seemed to have a small coterie when he first arrived to Portland, they soon disappeared into the night. Currently, John seems content doing his own thing.

Kindred Who John Views Of As Enemies:

Kindred Who View John As An Enemy:

As stated before, John is either telling the truth and doesn't know who his sire is, or is lying and simply doesn't want to talk about it. Regardless, it is not public.

None that John's aware of, or have made public.

None that John's aware of, or have made public.

No Children, by the Mountain Goats