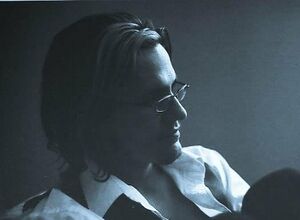 Embraced in 1968, Holden first showed his face in the Camarilla courts when he was Acknowledged as a citizen of the Camarilla by Her Highness, Prince Amalthea. After many years as a friendly face in the gatherings, often carrying on long conversations about philosophy with the Kindred of the Domain, he was found to be Admired by Prince Amalthea. He spent the next few years serving the Domain faithfully as a citizen, even going so far as to lead an assault on a Sabbat hideout in 1980, making him an individual to be Feared. After that, Holden spent the next two decades traveling, disappearing for years at a time, only to show up somewhere else across the country. It is said that he followed the road of Jack Kerouac for a time. Holden has recently moved south into the Domain of Los Angeles, and there was given hospitality by Prince Adrian Serra. In his time in Los Angeles, he has helped in the defense of Orange County from the sieges of the Rebellion, gaining the title Knight of Marble from Prince Serra for his actions during the defense. Holden has recently become more active politically within the Greater Los Angeles area, occasionally seen in mixed company with Anarchs from the OC. With the change of Praxis in Los Angeles, Holden has come to serve as a Primogen under the rule of Prince Ethan Neumann. Since then, Holden has become a powerful political force within the Domain, with one of his establishments being used for gatherings of the Domain.

Holden has recently returned to the Court of Los Angeles after disappearing for some years. He says that he was away on business in the Mojave desert, doing some sort of research. He has resumed acting as Primogen of Clan Tremere upon his return and is quickly becoming a political mover in the City of Angels.