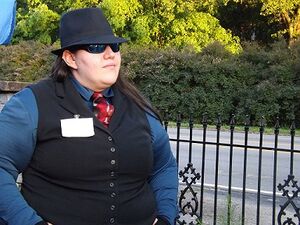 Toni in her standard gather-style outfit.

Physical description: Toni has long, dark hair and Italian features. She always wears dark sunglasses, long sleeves, black armwarmers, and a fedora. Even on her publicity photos, Toni wears a black hat with skulls on it and huge tinted goggles. In fact, she has never really been seen out of masculine clothing and appears to be very resistant to the idea of wearing a dress or skirt of any sort - or even not wearing the hat and sunglasses.

Toni is a very young kindred. She was raised in Detroit, Michigan in a very large, extensive traditional Italian Catholic family. She claims to have 15 siblings. Those who are confirmed are Guido Petrella, a recently embraced Toreador, Alonzo Petrella, a Malkavian (apparently), and Izzy Petrella who died in 2009 and had a clinic built in her honor. Explanations of Toni's family get pretty complex pretty early on, usually beginning with her parent's divorce. Most commonly mentioned relatives are her Aunt Maria, a nun, and her Uncle Frank who arranged for her college education.

Toni's DJing carrer tended to center around Detroit, MI and New York City, NY for the first couple of years until she was transferred to Atlanta by her boss. There she was embraced and eventually created her Media outlet, Otherwise Media. She expanded from this point into many directions. One of her first recording stars was David Blanchett of Clan Toreador.

Toni lives in a black stone villa fondly called "Dontgonearthe Castle" and at one point held gathers there. She has held the position of Keeper of Elysium for quite some time now.

Toni is internationally famous (Fame 5) as a DJ on a punk/metal radio program that airs four nights a week called 'Insomnia' and for her philanthropic works.

She suspects that there's a particular Sabbat pack out to get her, though. Current theories as to why abound and vary from reasonable (She's Camarilla, right? That'd be why.) to ridiculous.