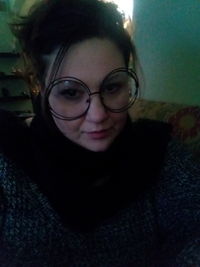 
Physical description: Brown hair, Brown Eyes, Unremarkable looks, always wears a bit too much makeup to look more humane, Impeccably dressed at all times in the most expensive, designer clothes. Her wedding band is simple, so simple in fact, it doesn't fit in with her aesthetic. She can sometimes be seen wearing the most absurd glasses she can find.

In the later months of 2017 Amelia, with her husband and a good friend, traveled from Alaska to Toledo Ohio. They remained in Toledo for a year until it was decided that Ann Arbor MI would be taken from the Sabbat. Amelia aided in the takeover and resides in the newly found Camarilla domain of Ann Arbor MI where she is Curator for Monroe's Auctions and Antiquities. Fame 1 Curator

I know who they are, and so do they.

Natural - Imagine Dragons
Diamonds - S.P.G.
You Should See Me in a Crown - Billy Eilish

Her husband went out for a pack of cigarettes and never came back.