Concept:
The really innocent girls in anime, that all of a sudden have a really large hammer and go on a rampage...

Physical description:
5'7", dirty blonde hair, blue/grey eyes. Her features are rounded, and she has a nice figure. She usually wears pink, and by usually, that means always... by order of Prince Kelly of the Lehigh Valley, not that she minds. She's very friendly, and easily gets along with mortals due to her appearance.

Aillish appeared one night in December of 2008, scared confused, and no recollection of what happened other than everything was way more intimidating than her. That night was rough, but she made it, and was welcomed by the other Brujah. Under Joe's accounting she attended school and fortified her craft in architecture. She graduated with a doctorate in architecture. Since then she's gotten herself further and further into the kindred culture, yet staying out of view of the older kindred.

Then the month of Brujah hell happened, and her life was forever changed. She had to step it up, be more brash and bold about her choices, and to find her own place in the society she was so terrified of being a part of. The perfect opportunity was provided, when a kindred by the name of Sam Brenson entered the scene, being found as her cousin, childe of Ethan Langley, she was excited to have another in the family, although it took some getting used to his mannerisms of being shy and practically afraid of everything. For a while Aillish thought she was looking on her past, but quickly brushed that off and aided her other cousin, Victoria Langley in his accounting. As if she wasn't rebelling hard enough against the restraints of her quietness and silence, Aillish attended the 2011 Event in Virginia, where she assisted in the combat against the infernal army lead by Hadrian and his men. She lost everything of material and sentimental value that weekend, but also gained things that she could never replace, like family and her clan. Not one week later she was excommunicated from her clan within the Valley for reasons unknown to her, what little was shared made no sense to her. Devastated by the abandonment, Aillish went on vacation, passing through Philly, and spending some vacation time with her clan down in the DC area.

Her ghoul, Buddy, a pure-breed Irish Setter, is her baby. 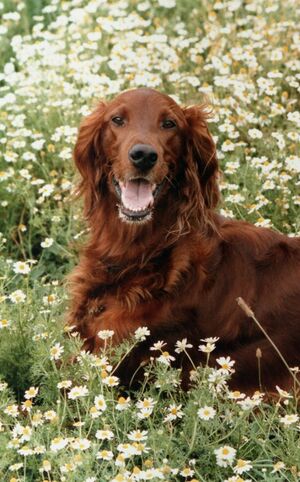 "Hey! I can hit just as good as Joe.... all he's got over me is the speed..... and Aegis.....and dominate...... and Quell....." *crickets*
Aillish to Rishi after Nonclave 2011: "Rishi.... can we please go home now??"
Aillish on Life and Human perseverance with Piscin:
"Thats true, but I find the aftermath most fascinating... You'd think that people would be angered by it, blaming, and cursing... but that's the odd thing about Humanity. Most brush off the disaster, and work together to fix the problem, thus making them stronger for it... not to mention, its like a full life restart... all the non necessities of life are purged, and it causes revaluation of the lives they've lived thus far, and what parts of their lives are salvageable. Its the intangible things about a person that survives natural crisis.I envy humanity, and their resilience to over come disasters, I mean for kindred its not all that hard, ya know? We have powers and stuff, the money, we can easily survive something as minute as flooding. But humanity gets hit time and time again, but they still stand and fight the god damned storms that come through, and they smile about it. I envy that about them, because they still have that realization how valuable life truly is."