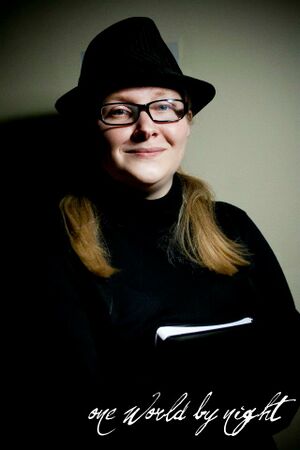 Physical description: Abigail is petite in stature, only a little over 5 feet tall, with blonde hair and blue eyes. She has the vital glow of someone who is not undead, and has a certain aura about her ((Blush of Health and Sanctity)). She often is seen wearing glasses, and typically dresses in a long sleeved black shirt and either black or dark blue jeans. When dressing up she will wear slacks or skirts and blouses, but black is almost always a color featuring prominently.

Abigail is soft spoken and reserved for the most part. She has been a resident of the Springfield, Illinois domain for over four years. She has a reputation as a psychologist and is a self proclaimed 'amateur botanist'. She's become more active on the local scene in the last year, first having taken up a Primogen position, and more recently taken on Deputy's duties.


Others:
3D of Clan Nosferatu
Johnny Perez of Clan Brujah


Non-Camarilla:
Nick Night (aka Bulvi the Wartooth) - Gangrel Anarch, Sons of Odin
Sylvester Thompson (aka The Crimson Cloak, aka Sylvester Svidason, aka Slick)

"So you're saying the kool-aid man burst through a wall, a Malkavian embraced a faerie, and then the demon infernalist took the childe away?" - Alastarr Quinn
"Well when you say it like that you make it sound ridiculous." -Abigail after recounting a very long story involving a Malkavian 'adventure time'