Very difficult to give an accurate description of 3D (ooc: Mask of 1K). One common thing that 3D wears, is a plumbers tool belt filled with tools of all sorts. He also wears a messenger bag that at times growls, and carrying heavy metallic objects. He is normally seen wearing a silk embroidered, Green Lantern shirt. He is also seen with his rosary and a necklace depicting our lord, Jesus Christ. 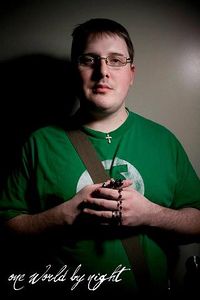 This figure stands around 6' tall and looks to have a slender build. He is standing wearing a black, hooded robe, seems to be old and frayed at the bottom. His hands are interlocked together looking like someone is standing in prayer, a wooden rosary dangling from his hands, that seems to give off a holy aura. You can barely make out his face as the majority of it is covered up (ooc: If you have seen 3D or Daniel without mask before then you have seen this figure.) His skin looks to be that of a leper or a Nosferatu. It seems that he possesses scales along his arms and any skin that is exposed, almost fish-like (ooc: piscine). He is wearing what look to be a green sash tied around his waist, and a book tied by a chain tied to his belt. The book is titled "Rituale Romanum" those with Latin know the title is Roman Ritual. A old looking longsword with designed like the Knight's Templar hilt is on the opposite side of his book attached to the green sash. There is also a symbol placed on his right shoulder of a Green Maltese cross pattern is sewn into the black robe. (with high enough Nos Lore, it will note it is the insignia of the Order of Saint Lazarus) 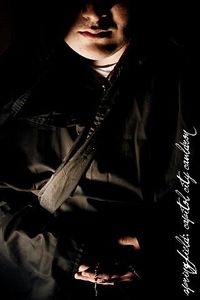 The Infernal, Blight, and Demons

Someone once asked 3D why he would be good in the position of harpy. 3D replied, "Because I am Nosferatu...," the individual looked questioningly at 3D. "What is that supposed to mean?" stated the individual. 3D replied, "I know where you sleep, I know what you did last gathering, and I know three different ways to get you blood hunted in this domain." The individual just looked at 3D with big eyes, and realized the true potential and power of the Nosferatu.