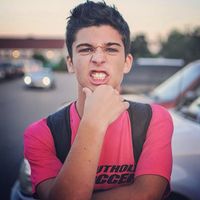 Capricorn is a young, dark brown-haired kid with a skinny athletic build. Some would say he has douchebag written on his face. He is typically seen in bright blues or plaids, rocking a blue fur boa. He has been seen sporting a black leather coat with a brown fur inlay on top of his usual plaid hoodie lately. Typical accessories includes a star pendant necklace, a vial of ashes with a note inside, a YOLO bracelet (he assures it's for the irony), a baseball cap of some sort, and a pair of sunglasses. Most find it unusual to see him without a drink in his hand and a headphone blaring music inside his ear.

Capricorn first jumped on the scene in Springfield, IL as of October 2012. He was associated with quite a bit of trouble involving Gemini, a known friend of his, the Fae and Prince Phillip Walken. This eventually resulted in Gemini being stripped of Acknowledgment and subsequently banished from Springfield. Scorpio, another friend of Capricorn, was banished at the same time for similar associations.

From there, Capricorn moved to Peoria, IL in mid-2013 and quickly became Primogen of the Domain as the only Acknowledged Malkavian in the city. Over time, he helped solve a great deal of investigations and worked with Malkavian relations. However, after significant amounts of controversy between then-Prince Rupert Swain and Clan Malkavian, Cap was loaned 11 measures of standing from Malkavians around the nation to solve the issue once and for all. A month later, on Nov 1st 2013, Cap claimed Praxis after Swain revealed a ton of scandals and rescinded his Praxis. He has gone on record saying that he plans to work on sorting out the city.

Cap is a well-known blogger, attracting the attention of many with his hilarious and witty evaluation of modern celebrities and their lives. He is most well-known for his vociferous support of musician and songwriting Ke$ha, an electro-pop/rock-n-roll hybrid sensation. She is criticized by many for her sexual lyrics and party-music theme, but Cap has gone on record saying that people aren't looking closely enough at what she is doing as an artist. He has also been involved in the music industry lately with a DJ known as DJ Sykotic, who won the Illinois-state-wide DJ competition that Cap hosted and MCd for in Springfield, Illinois. Cap is also known for his connections to some pretty big names in night club entertainment and high profile individuals in Illinois. It is rumored that Cap had a party that Aaron Shock even showed up to.

It is believed Capricorn is in a coterie of Malkavians named after the 12 signs of the zodiac.

Capricorn is based off of the typical party/YOLO teenager who was granted the gift of immortality for no other reason than he is good at having a good time and making others feel happy. Imagine "that" guy at the club downtown and that's probably a great way to describe the inspiration for Capricorn's creation.

The Fame (album) by Lady Gaga

"What's the point in living forever if you're not going to enjoy it?"

"People seem to think I give a shit about what people say about me."