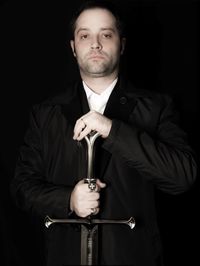 Physical description:Appears to be close to 40 years, average height of about 180 cm, short dark hair, pale skin, stubble and eyes like wolf. In social events he utilizes stylish custom clothes, tailored, yet he does not like to wear ties.