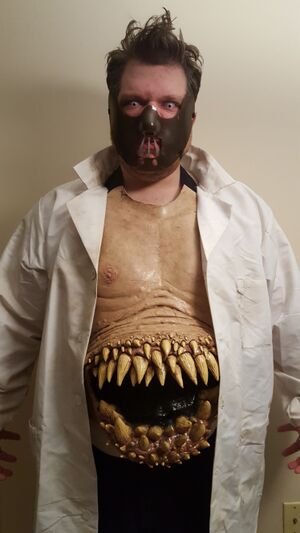 Physical description: White eyes, half mask over his lower face, with a gaping mouth with dozens of snarling teeth coming out of his stomach that he calls "The Maw". Wears a filthy lab coat and smells of death. 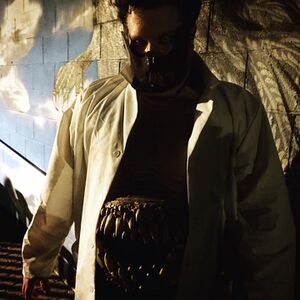 Boggs in the shadows

Dr. Boggs left Stamford, CT in 2015, the domain of his sire Edmond Dantes, and traveled to Hartford, CT to strike out on his own. He's made allies with the local Gangrel and pissed off just about everyone else. But he's been great at making problems disappear. He has proved his usefulness as the ultimate garbage disposal machine, as for some reason his stomach mouth (which he calls "The Maw" and claims it has a mind of its own) is able to digest and actually consume all types of matter and does not need to regurgitate it later like most Kindred do when they eat things that aren't blood. He is an enigma nobody cares to try and figure out because he smells like a decaying corpse and has the attitude of a drunken hobo. He offends all the wrong people and will eventually pay the price once his usefulness wears out. But the city of Hartford has a lot of garbage that needs to disappear...

Towards the end of 2016, Dr. Boggs was accused of selling information to the Sabbat and was bloodhunted. He fled to New Haven and joined the Sabbat, but was soon hunted down by the Sheriff of Hartford and destroyed.

Anyone who pisses him off. Mostly Toreador who make comments about his monstrous stomach mouth.

"Uh...are we seriously riding a fucking squid thing through the shit water? To fight smoke things? What the fuck has my life become..."

Dr. Boggs is not really a Nosferatu, he's a Tzimisce experiment.

There is no Jacob Boggs anymore. He's just something called "The Maw" pretending to be the host that it has consumed.

He was Embraced as a punishment by his sire for being an evil serial killer in his mortal life.

Dr. Boggs made a deal with a demon to get The Maw and its origin is infernal.

It's just an act. Dr. Boggs is actually a loveable and generous man who cares about...hahahaha sorry I can't keep a straight face. Seriously, he's a fucking monster.