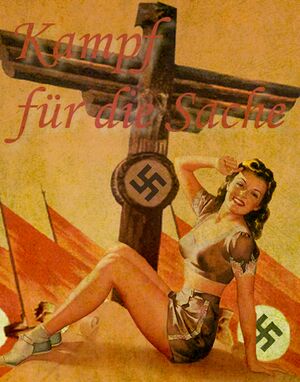 Carmela as she appeared on a Nazi propaganda poster

Physical description: Tall, blond haired blue eyed pin-up model; Aryan from head to toe. Her hair and makeup are old fashioned, almost vintage, although she dresses in a more contemporary style. Her signature color is gold.

Carmela was born in Germany and embraced during WWII by a Nazi propaganda artist, a Toreador by the name of Karl Megerle. She was the subject of a handful of his posters and assisted her sire in his journalism and propaganda efforts, using her charm and naturally Aryan good looks for the good of the war effort. After losing the war, her sire sought to protect her by hiding her. She placed in storage along with many other supplies, documents and experiments. Eventually she was shipped to Brazil and awoken to find her time in a box in an unheated warehouse in Germany had not treated her well. Flowers, the growth and arrangement thereof, had been her art and joy. Now they wilted at her touch. Cast adrift in a foreign country, without her sire or her art, Carmela retreated to the Brazilian countryside and disappeared for several years. It is unclear the extent to which she participated in Nazi activities; she prefers to enjoy the present rather than dwelling on the past.

Eventually she reentered society, moving to Sao Paulo, integrating with the Brazilian culture, learning the language and growing in her new art, making silk flowers. Eventually she grew tired of evading the violence and human trafficking dangers associated with being a pretty woman out on the streets of Sao Paulo at night. She moved to Minot, ND where she underwent the Accounting and received her Acknowledgement and fully reentered Kindred society. Sabbat overran the city and she was forced to flee to Fargo, where she spent a handful of years.

Interesting Circumstances lead her to be in Torpor in a basement of her purportedly good friend Roger's former haven. She was discovered three years later when the building was examined for rebuilding. Rather than wake her up and deal with the annoyance of being left in a basement for 3 years, she was shipped to Toledo in a box and has been living there ever since. She holds no ill will towards Roger and still talks fondly of him and the other Kindred in Fargo.

After the initial shock of receiving a mail-order-Toreador, Toledo has found Carmela to be a strange and useful addition to their city. With the recent political upheavals she finds herself as Primogen, a fact that still amuses her.

All of the German characters from Beerfest, most notably great gam gam