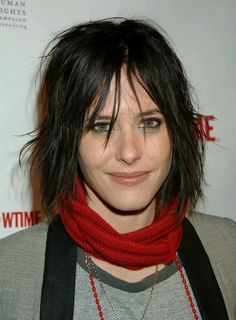 Abi at a recent media event

Growing up in a very very small town in Iowa, Abigail McCormack didn't exactly seem bound for Hollywood. She left for college first to attend the prestigious Writer's Program at the University of Iowa before eventually applying for and getting accepted into the exclusive Screenwriting MFA at UCLA. Abi then made quite a splash at the Cannes Film Festival, winning the Prix du scénario for only her first produced script. Her next few projects were ambitious enough to earn her sire's attention and Abigail was brought into the Toreador Clan. Her previous potential has yet to manifest after Embrace though and she disappeared from public life for several years before re-emerging recently. Her biggest claim to fame (much to her chagrin) is that she is the much publicized screenwriter for the film adaptation of Pride and Prejudice and Zombies. Nonetheless, she maintains some notability as one of the few screenwriters most people can name.(OOC: Fame x5)

She isn't aware of any.

Movies by Alien Ant Farm
Get This Party Started by P!nk
Tik Tok by Ke$ha
Our Lawyer Made Us Change the Name of This Song So We Wouldn't Get Sued by Fall Out Boy
Kick Push by Lupe Fiasco
Beverly Hills by Weezer
Here's To the Nights by Eve6
Lullaby by Shawn Mullins
Wide Open Spaces by The Dixie Chicks
Suddenly I See by KT Tunstall
Misery Business by Paramore
Let Go by Frou Frou
Hey Pretty (Drive-By 2001 Mix) by Poe
Left Behind by Ugly Duckling

"Wait, you haven't seen <insert movie name here>? Come over to my place, we'll watch it."