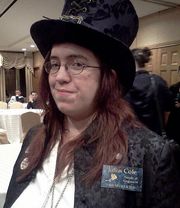 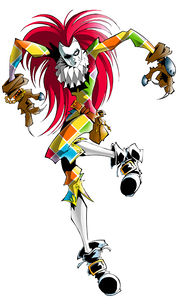 Physical description: Average height and body build with mid length brown hair that has reddish hints to it. It's sometimes Truffle Brown which makes it almost purple. Brown eyes and pale skin usually wearing glasses (sometimes tinted) with dress clothes. An Edwardian style jacket and her husband's black fedora give her a timeless look. She is sometimes seen in super fancy tailcoats and corsets. A pair of black combat boots or heels usually complete her ensemble. 180 lb's with a nimble sort of grace when she walks mixed with a drunken stagger. When revealed, on her left shoulder is what looks like a scarred brand of an LC inside of a circle which appears to be pre embrace. She always has a flask with some sort of alcohol on her, usually Black Rum.

Cherished from her entire Primogen Council of Philadelphia, PA

Julius Cole came to Philadelphia from Brooklyn, NY in September of 2002. She made it very well known that she fled due to the Rebellion, having been studying arts and performance at the University of New York City (Brooklyn). She has talked about Boston a lot, and even claims to still have family somewhere up North, although she never goes into details on who and where exactly.

She has vocalized on a number of occasions that since she's moved to Philadelphia, she continues to come in and out of her workshop basement and tries to throw a party wherever she goes. Despite not making a very public appearance, she seems to remain vocal both in mortal society and in Kindred society giving her the reputation for speaking her mind and not having a filter.

She came up out of her basement after a brief self-induced drunken torpor in December of 2010 and quickly reaffirmed herself as the Primogen in Philadelphia and then Harpy. She took Praxis in March of 2011 and in a few short weeks fixed her home domain from a dangerous Sabbat-infested city to a safe place for the Camarilla to rebuild.

During the Hadrian fight in Northern Virginia 2011, she was seen sailing a boat up the Patomac and holding Prince Dunstin in the water so he could bless it. She has since taken a strong stance against the infernal and it is said that nothing infernal can enter her city.

At Grand Elysium 2012, she was seen having a good time, even though she was busy in meetings most of the weekend.

Nonclave of this year she spent very little time in the lime light and after a very busy visit to Buffalo, NY she seems to be settling down in Philadelphia instead of traveling all over.

Midwinter 2013 she was dressed down the last night and spent it sharing drinks with fellow Princes and playing hide and go seek with her body guards.

She skipped Glitter and Gloom in favor of spending time with her family, and in April a life boon claimed her husband, Lucas Grunwald. She entered a state of mourning and began self destructing, leading her to step down as Prince of Philadelphia in an effort to do what was in the best interest of her domain. She was asked to remain as Keeper of Elysium until a replacement could be found. There's still whispers of self destructive behavior, although it seems like something has re-energized her drive since the memorial in Annapolis. 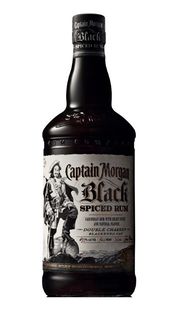 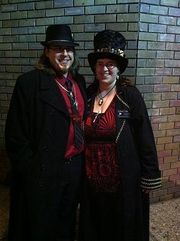 Julius and her husband Lucas Grunwald

None off the top of her mind. They tend to disappear after the fact.

Terry Hatcher (Rumor has it John Hamilton aka Timepiece is actually her sire.)

Relations Not by Clan

That drunk cool kid at all the parties.

"Burn it Down" - Linkin Park

"I didn't say he had to speak! He just has to stand there, be my escort, and occasionally hang on my arm! How hard is that?"

"I find it morally wrong to allow morons to keep their status......"

"It's not my fault! I didn't know those sewers were infernal"

"There's no such thing as bad habbits. Only inhibitions that one must overcome."

"If I have to come down there, I'm going to be pissed, and hell hath no fury then a sex deprived, sober Toreador!"

" You obviously don't have the IQ for this conversation. It's OK, not everyone is as awesome as me."

"Why don't you put me in touch with an adult? That's defined as someone who CAN negotiate"

"If you lay a finger on my ghoul, I will remove your brain through your nose, drop it in a blender with some tequila and dump it back into your head."


"What the hell is wrong with not having a national agenda? It gives us time to more important things. I can't think of them right now, but I'm sure they exist."

"If yous guys want fireworks, I need 15 minutes and good bottle of scotch."
"Why?"
"Because I need to process the fact that I'm about to blow myself up for your amusement and I want a really good last drink"

"Oh I'll know the ins and outs of his brain by the end of the night. Telepathy is my rabbit hole."


"I will stick my steel toed sneaker so far up your ass you'll be able to read my shoe size in your mouth!"

"Julius! Are you really going to do this here?" "What? There's a better place and time to poach a ghoul?" ~Moira O'Neil and Julius in Buffalo with a Gangrel Ghoul.

"If you want to see the fastest Toreador Clan Meeting at a national event, give her two shots of rum and random bits of explosives." ~Toreador from Cleveland.

"Will come after you if you go after anyone in her family. Reccomendation: If the last name is Cole, leave it alone!" ~ Sabbat listed information on visitors at Western New York

"Prince Cole is usually heavily armed, heavily intoxicated and highly volitile if you take her booze." ~Observation at Columbus 2012

"Of course she's doing something! She's been popping like a lightbulb all God Damn meeting." ~Clan Meeting in Hartford, CT

"She was broken and functioning just fine, now she's broken and who the hell knows how she'll be functioning now" ~Statement after her frenzy over the death of her husband.

Though she was once mildly startled by her childer Petra Grunwald-Cole .

Is not all there upstairs.

Was mistaken for a Malkavian at Glitter and Gloom April 2011.

Turned the Harpy of Baltimore into a Frog so she could be kissed and made into a "Pretty pretty Princess".

Is somehow related to Marcus Cole, Scourge of Buffalo, NY.

Likes to party and often keeps alcoholic mixers and shot glasses in her jacket.

Is married to Lucas Grunwald of the Children of Haqim.

Has been known to cash in boons owed to her for cheese steak subs and drinks.

If you see Julius go into a closet, RUN. Opening the door will surely be a bad idea.

Fond of closet hopping from domain to domain.

Doesn't like any of her children, which is why she keeps sending them to Buffalo.

Is actually fiercely protective of her childer.

Absynthe has been known to make her mean.

Has lately been seen making amends with long time enemies and acting more humane then she appears.

Was kicked out of a Clan Meeting in Hartford while she was derranged to prevent an incident between herself and Prince Anya.

Collects friends and allies like Pokemon. Gotta catch em all!

Has entered Edwardian Mourning after the death of her husband April 27th.

Was seen handing out Ecstasy pills from a Pez dispensor at her May gathering.