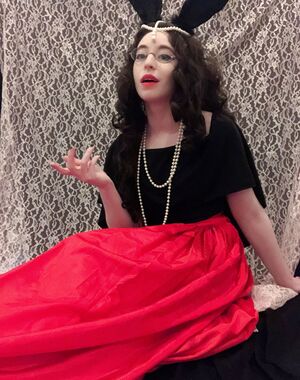 Mirel at the Savage Hearts Ball

Physical description: With fair skin and long, dark brown curls, Mirel is quite pretty, though not inhumanly so. She wears a pair of dark grey delicate glasses over her chocolate brown eyes, and cherry red lipstick more often than not. She dresses well, though within her means, always fashionable looking yet rarely wearing anything that could be attributed to any notable designer. She typically wears a shawl to cover her shoulders, and her skirts are always a modest length. Casually she typically wears boots, though at more formal events she can be seen in dainty heels. She is rarely seen without her "chai" pendant.
(Gorgeous x2, Magnetic x2, Elegant x1)

Mirel was born in Berlin in 1919 in a tight-knit Jewish community. She was discovered by her sire Adelheid at the age of 14, who spent the next five years honing the girl's natural vocal talents and grooming her for the Embrace. She would have taken longer, but picked up on the danger her prospective childe was in and stole her away and turned her the night before the Nazis would come to take Mirel's family to the camps in 1939. Mirel, with her newfound vampiric powers, declared her intent to rescue her family. Adelheid, recognizing this as a Masquerade threat, instead staked her childe, put her in a trunk, and moved the two of them to America. Mirel, upon her awakening, was understandably not happy about this, and the two had a falling out and parted ways.

Mirel wandered alone and independent for ten years before she cooled off enough to accept her sire's repeated offers to take her under the Accounting. She spent several years learning before she was Acknowledged in 1954, at which point she and Adelheid parted ways once more, their relationship once again cordial but never again to be truly close. Once a full member of the Camarilla, Mirel took to wandering once more, never staying in a place longer than a couple years, or more often a couple weeks or months, until she arrived in Sovereign Prince Rook's domain in mid-2019. She claims to have settled there, but who knows how long she'll stay put this time. The wanderlust always gets her eventually.

A Daughter known as Adelheid Ritter. They aren't in frequent communication.

None that she's aware of.