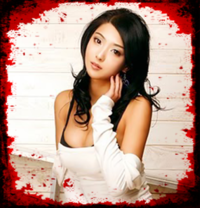 Concept: Spiritual Lighthouse; Ball of Innocence and Light; Girl with Beauty and the Beast Syndrome; Speaker With the Dead

Magpie is a petite half-Chinese girl in early 20s. Her hair is long and dark, styled variously depending on occasion. Recently she has taken to clipping tinsel or locks of colored hair like Zyra, the Toreador tattoo artist to whom she was recently under the Accounting. Her eyes are a gunmetal grey, a small beauty mark beside her right eye. She dresses in whatever feels comfortable, mostly purple hues, but nothing that would be too revealing. She tends to wear earrings of spiders, various other pendant jewelry from a thorny rose to a serpent, and a black diamond spider bracelet.

She has a powerful aura about her that attracts attention (both good and bad). It is nearly holy and positive. Wraiths and Umbral Spirits are attracted to this like a bug light. She also radiates a sort of innocence and calm.

Magpie was discovered on Halloween, 2010 wandering Prince Jericho Fenix's Domain. She managed to find her way to the party Gathering that night by intuition, claiming to have come from San Francisco. She did not know her Clan nor her Sire. At the Gathering she displayed a powerful oracular ability, which gained the attention of not only the Prince, but a Samedi named Dr. Willy, Servitor to then Archon Wendenheim. He took her under his Accounting and became her mentor. The coldly logical Doctor was often left confused by her upbeat demeanor, and the fact that she would not rest until she got him to give her a hug. The months to follow she proved a potent psychic. By January 6th, 2011, both she and Dr. Willy vanished.

Magpie resurfaced in Bloomington two years later, dazed. She found her way to an Elysium, holding Dr. Willy's lab coat. There she learned she had been in Torpor, and Dr. Willy was still missing. Prince Jack Weiss, after a brief meeting in his office, placed her in the care of Clan Toreador and the Accounting of Zyra. 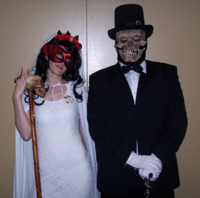 Monsters and Men, November 1st, 2013. Magpie as Mama Brigette the wife of Baron Samedi, and Pedro the Nosferatu as Baron Samedi. Their costumes were not coordinated and purely coincidental, the opposing Clans comical.

From then on, Magpie returned to Elysium with strange and violent paintings. She presented them to the Sheriff with whatever message came with the images. Strangely, emotion literally radiated from each work, often disturbing those that viewed them. She began working closely with the Tremere Sheriff Marcus Venetti and another psychic, a Gangrel Independent named Lotvar, Childe of Bulvi. Together they have solved many potential breaches to the Masquerade, stopped a Wassailed vampire, and released the imprisoned Anarch named Laslo of Iowa. It was not long after that the Sheriff requested that Magpie be Acknowledged and she Deputized...

... which lasted all of a few moments as Prince Weiss dissolved the Court and renamed Sheriff Marcus his Keeper. Magpie became his Assistant.

Two weeks later she had her first taste as Hostess of Elysium, Keeper de Facto as Marcus Venetti was away on business. That same night, she was made Primogen and Speaker of the Toreador, Tremere, the Unaligned and the Voiceless.

09/13/13 Friday the 13th saw a change in court, and Magpie found herself the new Keeper of Elysium. While there are no Primogen at the moment, she is speaker for all Clans and Voiceless.

In a back room of the local Elysium, several of Magpie's psychic paintings are displayed, covered over to prevent emotions from spilling out. One must deliberately go into the room and beware the consequences of viewing. 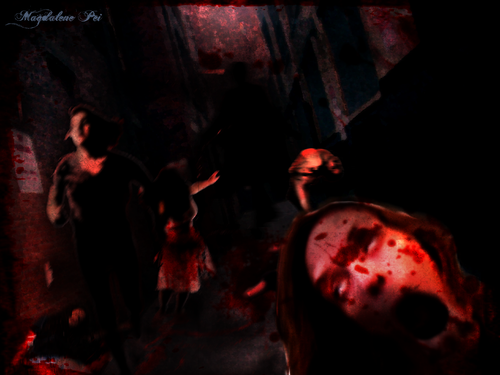 The first of Oracular works in Bloomington. A large shadowy figure stands at the end of a dark alley. People run terrified from it, only to be torn apart. Pain, fear, hatred, rage... hunger... these are what you feel from this work. ((Half-assed quick work. Will do a better one later.))

Most of the Bloomington-Normal Court

Magpie was based on a character from a short story for a creative writing class in college.

"Dancing With the Dead" by 10 Years

"Your Guardian Angel" by The Red Jumpsuit Apparatus

"Why Does Someone Have to Die?" by Philip Glass

"Happiness" by The Fray

"Question!" by System of a Down

"Spiders" by System of a Down

"Kiss From a Rose" by Seal

"Close Up" by Frou Frou

Magpie: I'm under the Accounting of Zyra of the Toreador now.

Katya: Oh, you have discovered your Clan? You are Toreador?

Magpie: The Prince says so.

Prince Weiss: That Snake necklace... does that have personal significance, or--

Magpie: Oh this? It's something I've had for years. I like snakes, too.

Magpie: It was discordant and haunting. Really quite beautiful, actually. I'm sure the Spirit of the piano was happy that it was finally being played.

"Jackson" Jamisson Tremont: What a minute, pianos have Spirits?

Magpie: All things do. One just has to pay attention.

Magpie: (whispers) What do you want to tell me? Can I help you?

Magpie: That's an awfully defeatist response. Let me help you.

Magpie: I'm just admiring the head of your cane... wow that was awkward. (laughter ensues, Pedro looks at his crotch) I really meant the cane!

She is really a Daughter of Cacophony.

She is really a Setite.

She speaks of The Baron as though she knows him.

She speaks to the dead.

She appears normal to those with Death Sight.

She predicted the Martial Law in Peoria, Il.

She was possessed by Mama Brigette at Eleanore Dears' November 1st Masquerade Ball.