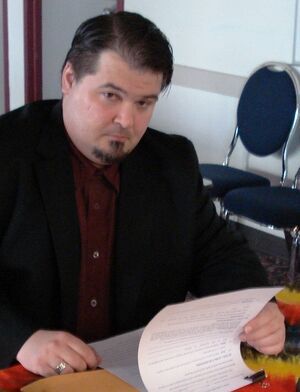 Lewis puts the finishing touches on a business contract.

It is known that Lewis was embraced in 2004. The Harpy record shows his sire Dalvadian Von Grossig was granted right of Progeny by the Prince of Regina Emily Grail. It is also known that he was placed under the Accounting for two years, and was granted Acknowledgement by Prince Emily Grail in October of 2006.

After that, there's no record of Lewis until the Gimli Harpy noted his arrival to the Domain, in November of 2009. The note is as follows: "Nov-2009. Smithe, Lewis - Ventrue - Acknowledged by Prince Emily Grail, confirmed. Granted Hospitality by Toreador Prince Grover of Gimli".

It has been close to ten years since Lewis arrived in Gimli, excited and filled with optimism. And in those years, that optimism has been tempered and tested.

Lewis has survived Sabbat incursions and Lupine aggression, political upheaval and Influence wars. He has survived, for the most part, because of caution and prudence when picking his battles.

It was recorded in Early October 2021 that Lewis has returned to the Domain of Gimli.

Lewis has had a public discussion with Fury Prosymnus regarding Coteries. The Fury decided to pull rank and claim offense so that they could "win" the argument. It doesn't seem likely Lewis will forgive this.

Waylon Smithers from The Simpsons.

"It may look like the Anarch hit me, but I like to consider a punch in the face without Potence the Anarch equivalent of a Handshake."

"Before we continue, I want to take a moment to glory in the fact that I was right. I have earned this moment, and you will grant me this time to gloat."

"There is no proof of a secret Lupine-Anarch alliance dedicated to the destruction of the Camarilla. Yet."

"I am proud to say that I have successfully weaponized Positivity."