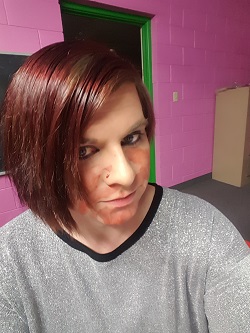 
Real Name: Evelyn Brass, if you can trust the doctors.

Apparent Age: Possibly Early 30's but she's practically skeletal and it is very hard to tell.

Concept: Victim of the late 1800's-early 1900's mental health care system. Broken mind that latches onto things and can't let them go until something new comes along. Has no filter between her brain and her mouth but doesn't really realize it.

Physical description: Skin and bones Asylum patient that looks like they have been starved for years. Hard to really tell age, just overall skeletal and hard to look at. Eerie Presence.

Lived in the St. Louis area before the area she was in was attacked by the Sabbat and was Acknowledged there after living as a ghoul for around 40 years. She definitely remembers that her sire died at some point but she can't be sure when that was, possibly during the attack. After her sire died she wandered all over the place following the Cobweb in search of others who were Seers or Prophets trying to understand how to fix the problem that no one believed her when she had visions. Eventually she felt a strong pull to Central Illinois and an asylum in Bartonville, Illinois packed with those of her clan. She decided to settle here for a time in late 2017 to explore this place and make connections. She earned her Residency in November of 2017.

If she has one, they haven't told her.

None known by her, if any.

for me. Plus some ties to AHS: Cult as well have been bred into her.

serious faux pas moments and a lot of shocked looks and uncomfortable laughs. It's easily the best part of the character for me, the lack of restriction is very liberating
over some of my other characters who try to play the political game.

Soundtrack (Careful it is all over the place)