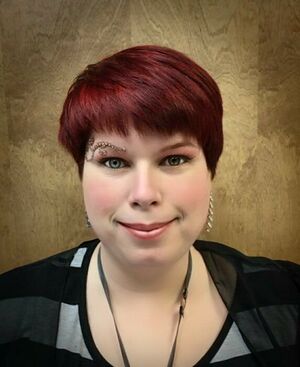 Claudia is, contrary to clan stereotypes, not overwhelmingly pretty. She's about average, appearance-wise, standing about 5'6" and weighing about 160lbs. Her features are attractive but not remarkable: round face, short red hair, blue eyes, but what she lacks in natural beauty she compensates for with an artful application of makeup, transforming average features into loveliness. Therefore, she is rarely, if ever, seen without makeup, though her ability with it is such that it never seems like too much or heavy handed. Her body is curvy but seductively shaped.

Much of the time, Claudia can be seen wearing her own handmade "refashioned" clothing - items and articles re-tailored or embellished with found objects, and sometimes created out of several pieces of other garments entirely. Her jewelry is also eclectic, many pieces assembled from a mix of fine gemstones and precious metals along with things others might consider everyday junk. The effect is actually very intriguing, and leads to many conversations about her art form of choice. Other times, depending on the formality of the situation, she wears couture fashion, but always something a little eclectic and/or bizarre.

Most of what is known of Claudia's mortal background can be found through previous interviews and artists statements, some of which have been archived online.

Claudia grew up in Las Vegas, a wealthy socialite whose money helped fund several burgeoning casinos and entertainment venues in the young desert oasis. She always knew money, surrounded by the rich, powerful, beautiful elite, and was inspired by the extravagant artistic works collected and put on display by the very rich. She went to New York to study at one of the prestigious art institutes there, where she would hone her skills and refine her focus as a assemblage sculptor, as well as meet her future husband.

Some time after they were married, her husband was killed in an attack, leaving Claudia heartbroken and once again alone.

Claudia's skills as an artist, focused on combining her powerful observations about place and identity, were gained through close study of the paintings and sculptures displayed in her family home and in the homes of her society friends. She compared this nuanced beauty to the facade and fakery, the rhinestone glitz and dimestore glam of the Las Vegas Strip. Eventually, after experimenting with and dabbling in many art techniques, she settled on various forms of mixed media sculpture, mosaic and assemblage, using found objects and humanity's cast off items to build something that spoke of the harsh beauty and complexity she saw in the people of her hometown. Most of her sculptures are small, not more than 3 feet or so tall, but contain minute and intricate details all formed with literal trash and recycled objects.

Her burgeoning local reputation was of interest to more than just galleries and collectors, however. Her artistic promise coupled with her high society background had come to the attention of Kenneth Miles, a local Toreador of some note. Not an artist himself, he nonetheless was enthralled by the rough beauty of Claudia's work and wanted to become her personal Patron. Her family contacts and fortune were an added bonus when he asked permission of Prince Benedic to Sire her.

After adjusting to her new life as a Toreador in Prince Benedic's court, Claudia made a reputation for herself not only as an artist intimately in tune with the human condition in the often harsh social, financial, and physical climates in Las Vegas, but as a member of the Domain and the Camarilla as well. Though never serving as an officer at Court, she was a continued asset to the Domain and her clan.

In late 2016, she was conscripted by her sire to fulfill debts he owed, which had ended up in the hands of the scholar Bindusara. Thus it was that Claudia traveled to the Twin Cities in order to spread information there about the rampant plague of Smoke Monsters, aka Daeva. Claudia was given a script of information to relay to the Prince, his court, or to any Kindred who was interested that might help the ongoing investigation of the Daeva and the fight against them - however she found that most of the information she was given was known before she arrived, and therefore she felt a little redundant in her efforts.

Still, she saw the assignment as an opportunity to start fresh. Her art was rooted in the culture and people and landscape of Sin City, and had stagnated. The novelty of change to a climate and landscape so very different, with people who were then shaped by that environment and thus must by her own definition be different, was fascinating to her. Upon her arrival, she asked Prince Abbot for permanent Hospitality in his Domain and was later granted it.

Working hard to rebuild the connections in the local mortal society that had come easily to her in her hometown, she involves herself in and strives to improve the already strong arts presence in the area, with everything from contributing funding for arts educations at the secondary and post-secondary levels, to participating in formal exhibitions. She is often seen at gallery show openings, learning about new and established artists, often purchasing examples of their best work. Other times she can be found at exclusive upscale entertainment venues, dressed to impress, rubbing elbows with the Cities' elite.

Recently, Claudia was made Primogen of the large population of Toreador in the Twin Cities Domain, and as such attempts to coordinate the efforts of the clan in improving the arts scene in the area, and assisting with other goals of the clan as possible.

“In my work, I'm often not referring to a particular landscape, landmark or person per se, but rather trying to create a visual catalyst that prompts our thinking of place and people and how we imagine them. I'm much more interested in the construction of ideas about the places we live and work: it's such a completely rich, subjective, internalized exercise that can function almost like poetry—an exercise about the environment which shapes us that becomes a mirror to ourselves.” -Claudia Pratt, Artist Statement