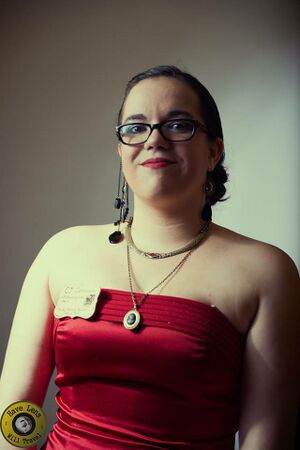 Physical description: CJ wears formal gowns to most gathering of luminaries. She has longer than shoulder length hair, constantly pulled and pressed tightly into place. She wears glasses and looks very purposefully put together.

CJ was embraced in the Pacific Northwest and moved to Cedar Falls, Iowa in the year of 2013. She became Tremere Primogen under Prince Hannibal St. Just and facilitated clan feeding areas. She involved herself in local politics and put the current mayor in office. After a change of praxis she became Seneschal to Prince Helena Russo. She moved to Iowa City in 2016.

Her sire is deceased and unknown outside of Clan Tremere.

“So let me get this straight, she is a lawyer, a Tremere and into politics? She is the most evil thing to exist.” –Prince Hannibal St. Just

CJ is a "Book Tremere" and is most at home in a library.
CJ was a party animal. After a particularly embarrassing incident she refuses to en-vibe any mind altering substance.
CJ uses sex to accumulate power.
CJ is actually Jenna Hill, a well known political author.
CJ lived her mortal life in the South, under a mortal man who was a Colonel.