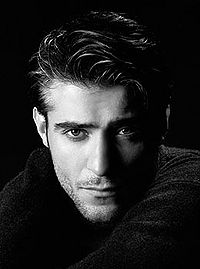 Physical description: Despite being very handsome and tall, of short black hair, alluring brown-green eyes, pale skin and apparently in the middle twenties, what really draws one's attention is the charisma Alan has, almost like an aura centered around his ever-present smile and jovial expression. Also, when setting eyes upon Alan, one has the certainty of having met him before and feels a level of confidence for him. Plus, his voice is deep and melodious, as if a hymn sang through it.

Eventhough Alan is scion of a long lineage of masters of scheming and manipulation, he is quite an unusual King, preferring to achieve his goals through friendship and courtesy rather than domination or supremacy. Until recently very few people (Ventrue included) knew of his existence, but he has been gaining more and more prominence, earning Favor and Social Prestige from many powerful Elders ever since. His age is unknown, but if the time of his Acknowledgment and the respect many other Ancillae have for him are good indicators there is more about this Ventrue than what meets the eye.

More than one can count, widely spread, but largely publicly unknown.

According to rumor, also numerous, but mostly publicly unknown.