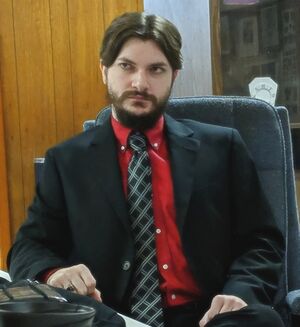 Physical description: Standing at least 5' 9", Richard is a Caucasian male that appears to have a very average physical build. He has short, black hair, a goatee, and green eyes. More often than not, he is seen wearing a business suit and a tie. Every now and then, he wears a pair of spectacles with blue lenses.

Basic Timeline
1994-2012:
Embraced in 1994, Richard lived the early portion of his unlife in the domain of Savannah, GA. During that time, he spent a year under the Accounting of his sire. At the end of his Accounting in 1995, he was granted the status of Acknowledged by then-Prince Asher Sinclaire. After some time of operating in the domain, he was granted the status of Resourceful by then-Primogen Francisco Palestro.

2015:
August - Richard resurfaced to the public eye, attending the Nonclave gathering. He did nothing in particular to stand out among those that had come to the weekend gathering, choosing only to engage in conversation and a small debate between Camarilla citizens and a couple of Anarchs from Florida.

2016:
December - Richard reappeared in St. Augustine. While there were some new faces in the domain, a few older Kindred recognized him. When asked where he had been for so long, he mostly answered with the reason of "research and studies."

2018:
March - Richard was selected to be Tremere Primogen in St. Augustine.
April - The Primogen Council pulled its support of Elijah Mortimer-Hall as Harpy of Clan Malkavian, replacing him with Kevin Cornell of Clan Tremere.
July - Richard was with a group of other Kindred that met with the newly arrived Malkavian elder, Margaret Stapleton. Among the Kindred that evening, Richard was the only Kindred that was teaching Ms. Stapleton about the new technology of the world.
September - Richard was with a group of other Camarilla Kindred that investigated the rumor of an unaging child being an attraction at a local museum of oddities. The party uncovered that the child was a powerful Ravnos, as they were all trapped in a mass illusion of Daedalus's Labyrinth. They all managed to break free of the illusion and remove the Ravnos from the museum, protecting the Masquerade in the process.
October - During St. Augustine's annual Halloween event, this year the Camarilla held their own party at the Nosferatu salon, the Treasury on the Plaza. Richard used the vault chamber to create an escape room, placing several puzzles in the chamber that a group had to solve in order to obtain the code needed for the vault door to open. The escape room was met with much acclaim.
On a different night in October, Richard went with a group of Camarilla Kindred to Palatka in order to aid the Samedi, Papa Mali, with recovering items from the Mirrolands and keeping them out of the Sabbat's hands. Richard and Kevin Cornel, though they got stuck with a group of Anarchs, successfully recovered one item and defeated terrible spectres.


2019:
May - Richard went with other Camarilla citizens to investigate the rumor that the residence of local ventrue elder, Tiberius, was attacked. They found signs of forced entry and that someone had been taken from the residence. The group managed to track down the vehicle and ambush the villains that had kidnapped a Camarilla citizen from the residence. It was discovered later that heavy influence was being used by the Sabbat of Jacksonville to place shipping containers of explosives and wights around St. Augustine. Efforts were made over the next few months to discover the containers and neutralize their contents.
September - Richard, along with the rest of the Primogen Council, decided to remove Kevin Cornell as Harpy and replace him with Tarif Naji of Clan Assamite, who was the Sheriff until that very night.
October - Richard attends the Nonclave gathering in Northern Virginia. On the first night, he and a group of Camarilla Kindred, in addition to Independent Samedi Eleanor Watts and a Wraith named Justin Smith, went on a mission into the Shadowlands to combat a powerful spectre to recover a Daeva shard. The group traveled through an area known as the Labyrinth, witnessing the horrors of wraith society before combating the spectre and recovering the shard.
The following night, he went with a group of Camarilla, Anarch, and Independent Kindred on a mission to recover the lost Toreador Primogen of Harrisburg, VA. While on the mission, the group bore witness to what the Daeva were able to do when possessing creatures and objects, many of the group witnessing it for the first time. Despite combating many entities possessed by Daeva, the group recovered the Toreador Primogen and returned her to the care of the Prince of Harrisburg, VA.
On the 23rd, Richard Kent was granted the status of Resolute by Sovereign Prince Christine Strauss of St. Augustine, in addition to being named the domain's Keeper of Elysium. While he is still Primogen of clan Tremere, he only claims the status gained from being the Keeper.
On All Hallow's Eve, Richard Kent attended the "wedding" of Sovereign Prince Strauss and Papa Mali of clan Samedi. The event turned out to be a wedding of two wraithly entities instead, much to the surprise of everyone that had attended, ensuring that the domain of St. Augustine had the Loa's protection from the domains enemies.


2020:
February - The guardian of the Well of the Black Water, the entity known locally as the Cat God, demanded a sacrifice from the Kindred of St. Augustine so that the tides of abyssal essence from the well may be calmed once more. While most of the local Kindred scrambled to recover artifacts of power in the hopes that they would suffice, one particular Kindred had another plan entirely. Sovereign Prince Christine Strauss called every citizen of St. Augustine together on February 28th for what would be her final performance, reciting a poem regarding that they must not mourn for her. After the recital, Sovereign Prince Strauss would be gently led, arm in arm, with the Cat God entity into its cavern, where the Well of the Black Water was known to reside. In that instance, most Kindred knew what was going to occur. A few would question Sovereign Prince Strauss and call for a different solution before she had left, but to no avail. A short time later, several Kindred would feel the weight of the abyss leave St. Augustine, returning the domain to normal. Sovereign Prince Christine Strauss was no more, having given her very unlife to save her domain.
The very same night, after all Kindred had regained their composure, Charlotte Cartwright of clan Ventrue claimed praxis over St. Augustine. None opposed her claim and she became the new Prince of the domain. The court changed drastically that night, with Richard Kent being removed as Primogen of clan Tremere and Keeper of Elysium. Prince Cartwright, towards the end of the evening, would make announcements regarding granting Kindred status for their deeds to protecting the domain. Richard was granted the status of Knowledgeable for providing wise council and mastery of the occult. When Prince Cartwright chose her new court members, Richard would be ultimately chosen to be Prince Cartwright's second in command as her Seneschal.
October - Along with several fellow Kindred of St. Augustine, Richard was granted the official title of Dignitary of the Camarilla due to his years of loyal service.


2021:
January - Richard Kent, in his duties as Seneschal, granted the local Malkavian Primogen, Bob Yonder, the status of Dedicated for his service in putting people together (effectively leading the effort and providing strategy) to use their resources for dealing with threats to St. Augustine over the past year.

March - Prince Cartwright announces to the domain of St. Augustine that Richard Kent has stepped down from the position of Seneschal, with his replacement being Abraham Sherman Davis of Clan Nosferatu. This is further announced by Keeper of Elysium Mikha'el Phuri Dae.

That information, good citizen, is private.

"Tell me, what is your opinion of (insert name/subject here)?"
"Clan Tremere is always willing to provide aid."
"You cannot possibly believe that the Rebellion will simply sit down and make any agreement with you. They are monsters!"
"Should you require a new computer to be built, I can do that for you. It would be a minor--no, a trivial matter for myself."
"I do believe that technology should be embraced by the Camarilla. Although our elders may be adverse towards it, the younger generation can pick up the reigns and attempt to convince them of its importance."

Richard claims to be an expert at developing computer programs and building computers.
Richard argued at length with an Anarch at the Nonclave gathering of 2015. The argument was about whether or not the Sabbat could be treated with, even on a temporary basis.
Richard clearly believes that science is superior to religion.
Richard often fidgets with small objects, like coins, when he is stressed or uncomfortable.
Richard is the Grumpy Cat of the St. Augustine court.